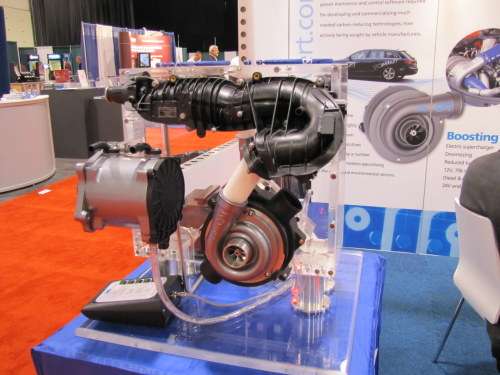 As the second part of a new, end-of-year recognition awards, and hopefully the start of a TorqueNews tradition under the automotive technology category, the Best of the Best Advanced Automotive Technology 2011 goes to the Electric Supercharger of Controlled Power Technologies, which was recently acquired by Valeo.
Advertisement

As with the Best of the Best Production Technology 2011 recognition, it is fitting that I first address the criteria by which the Electric Supercharger was chosen among the many fine, advanced technologies that were in this year’s running.

1) The technology has to be in the lab or advance-development stage, but ready for suitors to make it to production within the next two to five years.

3) The technology has to contribute to the efficiency of the automobile, preferably in the saving of fuel.

4) The technology must be cost competitive; meaning, it has to be affordable or support a system that is affordable by the masses and not require government subsidies to support sales.

Many technologies have contributed to the improvement of the automobile in 2011; and many are in still labs and under various stages of development by private companies and universities. Any visit to the SAE World Congress, the Business of Plugging In, The DEER Conference and many others will likely show these technologies as having not only great promise but future contributors to the efficiency of the automobile to meet the upcoming 2025 mandates by the EPA.

Be apprised, though, while the electrification of the automobile has taken center stage on may blogs and magazines, the IC engine has not fully finished its usefulness. So, the following candidates for this year’s Best of the Best Advanced Automotive Technology 2011 included both EV related and ICE. The list follows:

HCCI: The acronym stands for High Compression Combustion Ignition. It avails the best of the diesel technology but with gasoline. GM has had it in its labs for many years now. When I asked Bob Lutz about the technology on a recent call-in show, he stated that a company that he sat as a board member had a greater chance of making this work by ironing out the kinks.

Many of the tech conferences mention HCCI quite often. However, nobody has committed a date for which the technology will be available on a high production basis.

Split-Cycle Engine: Two companies come to mind here: Scuderi Engine and Tour Engine. Both companies split the Otto Cycle, but the Tour uses an opposed piston design so as to extract the most from thermodynamics.

Be apprised that this technology has already shown great promise in the area availing an air hybrid. It splits the cold, intake-compression cycles from the hotter power-exhaust cycles. Gain in thermo dynamic efficiencies defines its advantages. And while some OEMs looked at this technology in 2011, nobody made any public statements about its intention to use it. The lack of admittance tells this writer, though, that they are seriously looking at it; otherwise, they would have nixed it from the beginning.

External Combustion Steam Engine: Yes, the steam engine is also far from dead. In fact, it is being resurrected for both automotive and generator power use, because it can use waste fuel. The best example of this technology is the design of Cycle Power Technologies, which recently made an acquisition of a military contractor.

While it was hoped the run for the land speed record with this engine would take place at Bonneville, it was cancelled and moved to the NASA runway. Unfortunately, no further mention of the run has been available, which is needed to make this tech available for automobiles.

Cyclone Power Technologies is a publicly traded company. It is the developer of the award-winning Cyclone Engine - an all-fuel, clean-tech engine with the power and versatility to run everything from waste energy electric generators and solar thermal systems to cars, trucks and locomotives. Invented by company founder and CEO Harry Schoell, the patented Cyclone Engine is an eco-friendly external combustion engine, ingeniously designed to achieve high thermal efficiencies through a compact heat-regenerative process, and to run on virtually any fuel - including bio-diesels, syngas or solar - while emitting fewer greenhouse gases and irritating pollutants into the air.

Electric Supercharger: Most everyone is familiar with turbochargers and their inherent lag. GM has recently designed their turbos with a dual-cage to diminish this lag. However, all turbos are useless at extremely low RPM levels.

The Electric Supercharger is an induction air torque assist system which allows electrification to add pressurization to an engine at low RPMs. Furthermore, the future looks good for the potential and growth of this tech in perhaps allowing the storage of this pressure in the form of an air hybrid. In this writer’s opinion, the feature alone avails a greater opportunity for more vehicles at a lower cost that just about any new tech out there.

The very purchase by Valeo says this technology as getting ready for mainstream use.

Laser Ignition: Despite all the tech gains of the past decade with multi-valves, variable valve timing, variable cam phasing, etc., nowhere does the IC engine need improvement more than in the area of ignition control and the replacement of the spark plug; and that’s what a laser ignition technology brings to the table - energy control of the ignition including its location within the cylinder.

First noticed by TN in a report from the Liverpool University in England, Ford Motor Company (NYSE: F) is found to be working closely with the university. Unfortunately, every conference this writer has attended in 2011 yielded very little on updated information. This would equate to this technology not appearing anytime soon, unless the secrecy has the stealth of a Manhattan Project.

Think of the next generation of Ford EcoBoost. Replace those turbos with Electric Superchargers and watch the efficiency climb even higher; albeit it is uncertain if it will make the 54.2 MPG threshold.

Engineers know that some form of electrification will be required to meet the future 2025 mandate of 54.2 MPG; and this technology is right for the times. And while the split cycle engine likely has the ability to do it alone without electrification, the immediacy factor is negated by the lag of the OEMs from using technology not designed by them in their development labs. This is no reflection on Scuderi or Tour, but more on the entrenched thinking that often stymies the auto industry.

Congratulations to Controlled Power Technologies and to Valeo which had the insight to purchase them.

LG's New EV Battery Plant Is a Welcome News for Tesla
Tesla Giga Berlin's New Hurdle: It's Not Only the Gov't, but Now Tesla Itself
END_OF_DOCUMENT_TOKEN_TO_BE_REPLACED