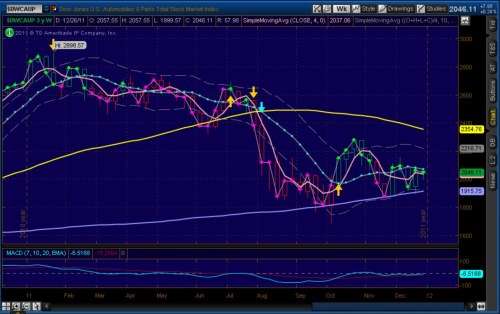 With Friday being the last trading day of 2011, it’s time to look at the weekly chart of the Auto Sector Stocks for the year to see if there are any investing insights, opportunities and strategies for 2012, especially for January when the 2012 NAIAS takes place in Detroit.
Advertisement

OK, the bad news first. Despite plenty of news about returning sales at the automakers like General Motors Company (NYSE: GM), Ford Motor Company (NYSE: F), Toyota Motors (ADR: TM), etc., the auto stock sector in 2011 reflected much pessimism due to the global economy. Just about every auto stock chart showed an upper-left to lower-right downward bias, except for Tesla Motors (Nasdaq: TSLA).

In other words, most auto sector stocks held a bearish trend bias. So, it was hard to make money in auto stocks unless you had the ability to play rallies; or the downside by either shorting directly or using put options.

Question for 2012 is, will the major auto sector stocks turn around? And what will be the catalysts (note plural) that will turn it around?

1) It doesn’t matter who or what you read, the news on the global economy is still pressuring the auto stock sector. I suspect the European debt crisis will hang over America as well through 2012. Nonetheless, the debt issue worldwide is being addressed. We may not like how it’s being done, but it’s no longer being totally avoided, except by a host of senators and congressmen in Washington, including the President, who think just cutting spending growth is an intelligent option.

2) The electrification of the automobile is now reality, no longer relegated to someday-in-the-future displays at the major auto shows. They are in production, ramping up production and here to stay; albeit those taxpayer subsidies will one day have to go.

On the other hand, the price of an EV is out of the range of the masses. And while those who have the ability to take advantage of the subsidy offer, the masses are once again shut out through no fault of their own except they cannot afford it.

So, the IC engine will still be here, but with greater efficiency. While many think the technical approach has been to lay everything on the table, many incorrectly assume the ICE is dead because the ammo has been used up. Fact is, not all technical ideas are being put into production. Ford, for example, may have downsized its engines in the effort to minimize CO2, and has replaced the power losses with turbos and named it EcoBoost, but there is more to do. Think laser ignition, cylinder shut-off, air hybrid and electric supercharging, for example.

Will all this get to the 2025 mandate of 54.5 MPG? I do not know for sure, but there is one technical advancement that has a chance, and it’s not electrical at all. It’s the split-cycle engine that segregates the cold intake-compression for the hot power-exhaust cycles.

What you may not realize is that there are indeed other options still in the labs under development which will give the EV a run for its subsidy money. Witness GM’s HCCI technology which runs like a diesel but on gasoline. My favorite, though, is the Scuderi Split Cycle engine and the Tour Engine that many OEM are looking into; and both have air hybrid capability.

Then there are all those components that can electrify the automobile just enough to improve city driving and make hybrids affordable, like GM’s eAssist™ and the new electric supercharger of controlled Power technologies that was recently acquired by Valeo, a major supplier to OEMs.

3) Look at any auto stock chart and the pattern will likely look similar to the $DWCAUP, the only index-like indicator that we have for automotive. It is called Dow Jones US Autos & Parts. I suggest following that chart on a weekly basis if you are an auto stock investor.

4) The US Dollar (USD) is getting stronger, not weaker. Many analysts fear inflation due to the quantitative easing by the FED, but deflation still seems to be the greater enemy at this time. Furthermore, the USD is still looked upon as a safe haven. Witness that gold started a major sell-off in December.

5) Commodities will be affected by the value of the dollar as much as any hoarding of rare earth material by China. Furthermore, despite the slowing of China, their per capita income is still way below ours and the rest of the world. That means they have a long, long way to grow; and that implies more iron, more copper, aluminum, oil, grain, etc.

It won’t take much to push oil back up to $120 per barrel either, especially if Iran starts a skirmish at the Straits of Hormuz. Question is, will China come to its defense? Think about the repercussions, as China is already building aircraft carriers to challenge America around the world.

6) Looking again at the $DWCAUP but using the weekly chart provided, reflecting the Dow Jones US Autos & Parts, you see a familiar price-dynamics pattern that reflects all the negative sentiment of what you experienced in 2011. For the record, we did establish a likely bottom in early October followed by a swing peak in late October. Furthermore, the 50-week moving average (yellow) is above the 150-week moving average (light purple). That’s still technically bullish, but only from that perspective.

On one hand, if most of these auto stock charts are still showing a bearish bias, does that mean the risk is in buying, unless you have a very long-term horizon?

According to the definitive book on value investing, “The Intelligent Investor” by Benjamin Graham, (who was the mentoring voice for Warren Buffet in his early years), “stocks become more risky, not less, as their prices rise - and less risky, not more, as their prices fall.” Elsewhere, Graham wrote, “you should welcome a bear market, since it puts stocks back on sale.”

I noticed that a few technical analysts on CNBC seem to be pointing toward the wedge pattern in the S&P 500 chart. Well, since the price dynamics have been similar, that same pattern also appears on the $DWCAUP. That also means, if their predictions of a highly probable breakout to the upside occurs, then the auto sector stocks will go for the ride.

The chart I have provided is a weekly chart of the $DWCAUP. Note the index itself is trading below the 50-week moving average (yellow) which is bearish. However, note the index is just above and resting above the 150-week moving average (light purple); and that is acting as support. Also note the MACD (7-10-20) which I devised for my own trading is showing a bullish bias. However, be apprised that means buying on dips only.

If there is any breakout of the channel to the upside, the yellow 50wk MA would act as potential target. That depends more on the general market than the auto stock fundamentals, in my opinion.

In this case, I prefer to think and act like a trader. I may look to buy some call options on my favorite auto stocks rather than buy the stocks outright at the market. It’s cheaper, has plenty of opportunity for fast profits and the loss is limited to the cost of the option. I would prefer a retest of that 150 wk MA, though, as a measure of greater upside probability.

Another play is to sell lower put options for income. If the stocks go up, then take profits on the gain of the puts. If the stocks stay steady, collect the income from the put premium. And if the stocks get put to you, then you just bought them below present market value and got paid to wait.

-----------------------
Full Disclosure: At time of publication, Sherosky, creator of the auto sector charts for TN, is neither long or short with the mentioned stocks or futures, except a call option on Ford, though positions can change at any time. None of the information in this article constitutes a recommendation, but an assessment or opinion.

Toyota's First EV Will Have a Name of BZ: Toyota BZ
First Videos From Inside The Boring Company's Las Vegas Loop
END_OF_DOCUMENT_TOKEN_TO_BE_REPLACED