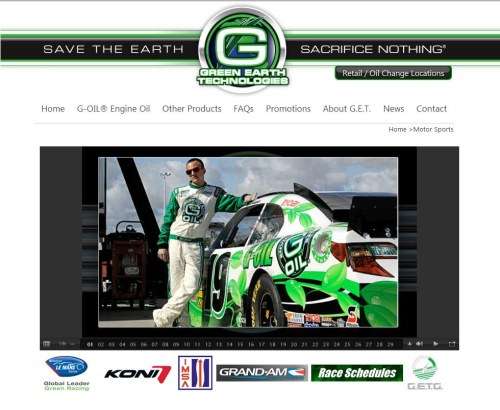 Watch out for #19 G-Oil Toyota Camry which will debut at the 2012 NASCAR Nationwide Series season opening Daytona 300 at the Daytona Motor Speedway, February 25, 2012. This announcement by G-Oil also means the NASCAR world got a bit greener today.

According to the public release, “G-Oil wants to demonstrate to consumers that our American-made green racing oil can stand up to the rigors of NASCAR competition,” said Jeffrey Loch, President and CMO of Green Earth Technologies, Inc. “Remember, ‘G-Oil’ is not just on the car-- it is IN the car,” said Loch.

Seattle area native Tayler Malsam, 22, got his first laps aboard the #19 G-Oil Toyota during a day-long recent test at the Walt Disney World Speedway in Orlando. “There is already an energy and excitement building around the G-Oil TriStar Toyota team,” said Malsam. “We want to prove that G-Oil works on the track and help tell the story to race fans and non-race fans alike.”

For the record, Malsam finished ninth in the 2008 ARCA Series championship as a 19-year-old rookie. He was runner-up to NASCAR veteran Johnny Sauter for Rookie of the Year honors in the NASCAR Camping World Truck Series in 2009, scoring 10 top-ten finishes.

Kyle Busch selected Malsam as his teammate for the inaugural season of Busch’s truck series team in 2010, but agreed to let Malsam move to the Nationwide Series with Braun Racing. Malsam has driven partial seasons in the NASCAR Truck and Nationwide Series the past two seasons.

“Tayler Malsam is a rising young star in NASCAR and he will help us tell the G-Oil story of clean, American-made, environmentally preferred motor oil not only to NASCAR fans but to everyone who cares about performance, the environment, and American energy independence,” said Loch.

TriStar Motorsports team owner Mark Smith, a 30-year NASCAR veteran, is a key part of the G-Oil program. In addition to his three-car NASCAR Nationwide team, Smith is the owner of Pro Motor Engines (PME) a leading builder of race engines for all three NASCAR series. Smith’s engines have won three NASCAR Truck Series championships (2003, 2004, and 2009). In addition, Smith received the prestigious MAHLE Clevite Engine Builder of the Year award in both 2008 and 2009 NASCAR Camping World Truck Series competition.

“PME and the TriStar team are really looking forward to working with Tayler, and the G-Oil Toyota Camry team to help prove the G-Oil story and tell it to a very big audience,” said Smith.

Malsam and the #19 G-Oil Toyota Camry will debut at the 2012 NASCAR Nationwide Series season opening Daytona 300 at the Daytona Motor Speedway, February 25, 2012.