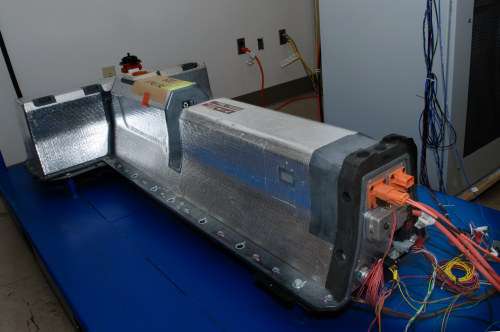 Since his presentation at the DRI Strictly Automotive Seminar, Fred Fresard, a partner in law firm Dykema’s automotive practice, spoke on the phone with TorqueNews regarding the post-test, single Chevy Volt fire as the result of a NHTSA crash test, and the how plaintiffs are getting in line over energy storage systems for EVs and HEVs.
Advertisement

According to Dykema’s own website, Dykema.com , the emergence more than thirty years ago of the judicially-created doctrine of "strict liability in tort" created a significant and potentially disastrous risk to the manufacturing industry and retail trade. The doctrine fostered an explosion of litigation against product manufacturers, distributors, retailers and others and an area of law commonly known as "products liability".

So, it comes as no surprise that despite the fact there hasn’t been any recorded incidents stemming from a Chevy Volt catching fire after a crash, plaintiff attorneys will not stop jumping to conclusions.

Fred Fresard, a partner in law firm Dykema’s automotive practice, challenged me to look up HEV and EV liability via a Google search. I did and what was found was a bunch of legal firms offering their services to anyone affected by any so-called failures of technology as it relates to the electrification of the automobile.

One that I chose read as follows: “Electric vehicles may be hot right now, but they're not supposed to catch on fire. General Motors Co. Chevrolet Volt vehicles are doing just that, and Pennsylvania Volt owners may have a defective product on their hands.”

Fact is, following the Volt incident after a NHTSA crash test, several plaintiff firms are already trying to pursue new theories of product liability against EV automakers and are soliciting consumers of the Chevy Volt to take action.

Mr. Fresard told me that plaintiffs are positioning themselves for a reason, to become the #1 Expert in the area of HEV liability, which I assume avails them a status among all law firms. And based on my interview, it was clear that Fresard also feels the some plaintiff attorneys may be jumping to conclusions with the Chevy Volt incident, as they often do with any new technology.

In this reporter’s opinion, I sensed the same jumping to conclusions with the media questioning of GM’s Mary Barra and Mark Reuss at a news conference a week ago. The media seemed to want to focus solely on the fire, the cause, etc., rather than GM’s openness, which should have been a refreshing element after the mishandling by Toyota of its accelerator issues which turned into a media fiasco.

For the record, the law firm, Dykema, has one of the most extensive automotive legal practices in the United States. Their lawyers regularly represent automotive companies headquartered through the world and also represent suppliers and OEMs in multi-million dollar mergers and acquisitions, in a broad array of auto product liability, commercial and supply chain management litigation. The firm even handles class-action litigation in the most challenging jurisdictions, and before the US Department of Transportation and other federal and state departments and agencies.

Also for the record, Fred J. Fresard, is a member of Dykema's Automotive Industry Group (see http://www.dykema.com/bio/display.asp?empID=936 ), and is currently advising several hybrid and electric vehicle manufacturers and suppliers on liability issues related to this new technology. As such, I found him to be an informed source to talk about the broad issues facing the auto industry, especially as the auto industry trends toward more electrified vehicles, not less.

I mentioned that I has spoke with Bob Lutz on a Ustream.tv call-in show a week ago, and I found Lutz feeling the same as Fresard in many ways. Lutz even stated that “over 250,00 gasoline cars catch fire every year“; and that this Volt incident was “not a real-world risk.” When I asked Fresard for his take, he had no issues with statements by Mr. Lutz.

Lutz also noted that GM literally went the extra mile to “avoid disparaging the NHTSA test.” In this reporter’s view, perhaps that comes part and parcel with still being owned in part by the government. Lutz also insinuated that NHTSA perhaps failed to properly address safety protocols, especially since the test vehicle was completely non-drivable after the test.

Mr. Fresard declined to offer any criticism of the NHTSA test procedures. Perhaps he didn’t feel the need, as the news that over 6400 people have already purchased the Chevy Volt and not a one of them has had any issues, including Bob Lutz’ own car, seemed to state it best for the record of public opinion.

Facts As Dykema Knows Them

1) Both GM and NHTSA have stated publicly that these lithium batteries are no more prone to a fire than any other combustion vehicle out there. If properly managed post-crash, there is absolutely no risk in these batteries catching fire.

2) There have been absolutely no actual examples of lithium batteries catching fire after a crash in a real world scenario, and this incident took place in a controlled laboratory setting by NHTSA.

3) The auto world is being extremely proactive to make sure that this incident won’t occur on behalf of a consumer. This is an example of how the safety system is working and that NHTSA and GM are doing their jobs right.

4) Automakers, battery suppliers and federal regulators have taken significant steps to reduce the risk of electrical fires in HEVs. For example, the high voltage components are isolated from ignitable materials, and sophisticated battery management systems monitor the battery state and ensure the battery stays at the optimal temperature at all times.

5) Although charging systems are designed to prevent overcharging, and the battery itself is heavily protected from damage in a crash, many manufacturers are developing different Lithium battery chemistries to reduce the risk of thermal runaway.

6) There has not been any recorded incidents stemming from a Chevy Volt catching fire after a crash. In fact, over 6400 people have already purchased the Chevy Volt and not a one of them has had any issues.

7) The federal government is also working to reduce the risk of thermal events in HEVs. Federal Motor Vehicle Safety Standard 305 requires that manufacturers take certain steps to restrain the battery in a crash, prevent electrolyte leakage and isolate the chassis from the high voltage system.

It is crucial at this point that any reference to a "Chevy Volt fire" has to be in the singular. Only one Volt had a fire after a crash test; and, to his recollection, the two subsequent sparking and smoking incidents occurred after lab tests on Volt battery packs where NHTSA was trying to induce a fire.

He cited a few dates, too, where in June 2011, the National Highway Traffic Safety Administration (NHTSA) announced a three-year, $8.75 million study to analyze risks and develop technical requirements and appropriate test procedures for vehicles equipped with Lithium-ion batteries. Then, in September 2011, NHTSA sent an informal request to all automakers asking them about their procedures for post-crash handling of lithium batteries. Furthermore, he implied the industry is doing its job right in making every effort to deliver safe products.

Then I related to Mr. Fresard from my own automotive design experiences, where nobody ever came into work intending to design an inferior or faulty product. Of course, there are always decisions which have to balance cost with reliability, range with level of safety, etc.

Still, Mr. Fresard did leave me with his opinion that we may not have real field data for lithium-ion batteries in vehicles, but we do have at least a full decade’s record of field data of consumer electronic products which use lithium-ion batteries as an energy storage source; and that technology has been “stellar” in terms of managing any thermal runaway.

Another point is, thermal runaway from a lithium-ion battery of any kind is not immediate or explosive. There are indeed telltale signs, which avail ample warning of a pending issue. However, there are also safety protocols for HEVs not much different for any energy storage system; even gasoline cars have to be drained of fuel after a serious crash with deformation.

Finally, I wanted Mr Fresard’s take on the handling of this issue by the media and whether the storyu had spun out of control. He was emphatic in stating, "I don't believe the Volt story has 'spun out of control.' I believe the one-sided media frenzy, if left unchecked, has the potential to create a mistaken perception about this very safe technology."