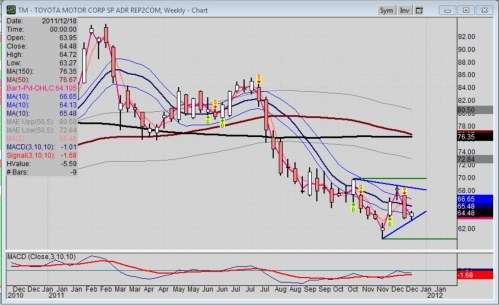 Toyota stock traded barely up today; meaning the stock didn’t even react much to Moody’s downgrade of Toyota’s US financial arm, Toyota Motor Credit Corporation (TMCC) either. However, news of improvement in 2012 profits was balanced by news of a Yen appreciation effect.
Advertisement

Anytime a credit rating agency like Moody’s resets a rate, the news alone often will affect a stock with volatile pricing for a few days. Not so with Toyota stock; then again, this is pre-holiday trading. Still, mart traders always search for the underlying reason behind the rating.

In the case of TMMC, which is the financial arm for Toyota, the rating is based on methodologies such as Analyzing The Credit Risks Of Finance Companies published in October 2000, and Rating Non-Guaranteed Subsidiaries: Credit Considerations In Assigning Subsidiary Ratings In The Absence Of Legally Binding Parent Support published in December 2003. All this per Moody’s.

Nonetheless, there is often a collateral reason not readily or openly mentioned. I had heard via the CNBC reporting of Phil LeBeau that the appreciation of the Yen would affect the profits in 2012, which Toyota noted last night in Japan that they would improve significantly post floods in Indonesia.

Fact is, Toyota has enjoyed a depreciating Yen for many decades. So, any appreciation means any profits returning to Japan from America, for example, would result in a lesser amount due to the Yen’s appreciation against the US dollar.

Toyota stock has reflected the negative effects of the earthquake and tsunami in Japan, and the floods at plants in Indonesia.

Look again at the weekly chart and notice the two converging blue lines. These are trend lines that have defined a wedge pattern. This means TM is in a state of uncertainty. It is neither rising or falling with any significance. That also means that pressure is building for a breakout to the upside or the downside.

I’ll let the fundamentals help you decide which direction. Be assured, though, the negative news out of Europe has major bearish weight these days on everyone, especially auto companies.

While the holiday volume is significantly lower, we may not see any decision one way or the other until traders return after New Years.