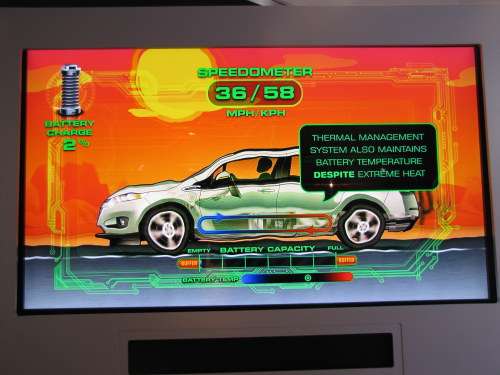 GM may be avoiding public perception at its own peril once again. After all, GM and its CEO, Dan Akerson, may have the grand desire and the ability to build 60,000 Chevy Volts in 2012, but the more fundamental question is: Can GM sell all 60,000 Volts in 2012 at its present price?
Advertisement

It is not unusual for CEOs to get snookered by their own marketing team. And I’m afraid General Motors (NYSE: GM) CEO, Dan Akerson, may be one of them, as he seems to buy-in to rhetoric that has no basis in common sense or understanding how much people are suffering economically today.

The issue for me is not over the Volt technology, the style of the car or even the safety. No, the issue is over the cost, no less than it is for many other potential customers who take a test drive, fall in love with the car, then get shocked when they see the sticker and the monthly lease. While I tend to believe GM is OK with offering a cheaper Chevy Cruze, that is still considered by the public as a marketing ploy that puts a fowl taste in the mouth.

As an early retiree about to receive social security, I find the Volt’s propulsion technology too cool to ignore. Since my drive miles are nowhere near what I used to require when I was working full time driving from Clinton Township to the GM Tech Center in Warren, Michigan, plugging-in would leave me with little choice but to drive extra just so the gasoline doesn’t go stale, or buy Stabil for the gas tank. Point is, owning and operating the Volt would be ideal for my driving style and needs.

Yet, when I combine the cost of the car with the savings on gasoline, I still find no grand economic advantage.So, why buy a Volt? In my case, I would be paying a severe premium to be partially green, considering that Detroit Edison still uses coal in many of its power plants. And economically it is barely a wash. So when I drive less, I’m still paying out more.

At least if I choose a small IC engine vehicle like a Chevy Cruze with a cost around $210 per month, the economics are far better, even with higher gasoline prices. Sure, if I drive a lot, the total monthly cost would approach the cost of the Volt. Nevertheless, when I do choose not to drive, I would surely save gasoline and still not have to make the high lease payment as I would with the Volt.

Looking at it from a pure dollar perspective, I do not a find a $400 per month lease to be palatable for me or for the masses, no matter what shade of green the Volt is perceived, or how many MPGe it gets. Fact is, the Chevy Volt is just plain too expensive to justify the expense.

Perhaps GM is counting too much on first adopters. For sure it is far too dependent, in my opinion, on federal subsidies to the tune of $7500. Who pays that? We, the taxpayers, of course. There is no free lunch no matter how many ultra-liberals you can count on the head of a pin.

What will GM do when the federal subsidies run out? My guess is, sales will fall like a rock; unless, that is, unless they reduce the cost significantly.

In my opinion, the Volt needs to be priced no higher than $28K for starters; or no higher than a Toyota Prius. Otherwise, GM simply has another car that is desired, but with insufficient customer funds available to buy on their own; and note I wrote, “on their own”; meaning without help from taxpayers.

In my opinion, to have any significant economic impact, the lease rate has to be palatable for the masses, more tot he tune of $300 per month max. Then GM would sell Volts like hot cakes.

Sure, I understand that lithium-ion batteries are expensive. And I understand the development costs have yet to be paid in full. Then again, that is the nature of product development. Those costs have to be expensed over many years, much like when customers buy their products over time. Yes, time is important, but profits dictate a mighty stress on corporations.

In many cases, the need for profits under a government mandate to build more EVs wastes everyone’s precious capital in the form of delivering, not what people can afford, but what the corporation must build to keep political face. And I find that a display of poor corporate character. I know that word, because I invented in in 1997 with my own book. “Perfecting Corporate Character” before Enron, before the tech wreck, before the housing crash and before GM went bankrupt.

Point is, GM has built cool cars before but priced them out of the range of affordability. Recall the Chevy SSR truck? It was cool, every guy including me wanted one. Yet, what did GM do? Limited production and placed a $42K price tag on it.

All GM had to do was make it a truck with cool style, then place a reasonable price tag. That, too, would have sold like hot cakes; ok, chocolate hot cakes!

With all respect to Mr. Akerson, he needs to lead GM toward making products that are affordable. If he doesn’t, then the Chinese will soon eat GM’s lunch. And don’t be surprised if that is the reason behind that new tech center in China.

My next concern would then be, what happens if China kicks GM out by 2020? I’ll address that possible scenario next time.

Anonymous wrote on December 21, 2011 - 9:27pm Permalink
I'm a lifetime Republican. I never believed in the gas company conspiracy of killing competition with propaganda until I actually drove and then purchased a Volt. Not only do I love the car, love the torque, love the silence, but this is my monthly gas spend before and after the Volt. 1/11 - $384.17 (2008 Honda Accord V6). 2/11 - $346.18 (2008 Honda Accord V6). 3/11 - $417.10 (2008 Honda Accord V6). 4/11 -$406.91 (2008 Honda Accord V6). 5/11 - $439.99 (2008 Honda Accord V6). 6/11 - $537.65 (2008 Honda Accord V6). 7/11 - $356.95 (2008 Honda Accord V6). 8/11 - $222.85 (2008 Honda Accord V6). 9/11 - $293.04 (2008 Honda Accord V6). 10/11- $29.63 (Volt Month). 11/11 - $53.27 (Volt Month). 12/11 - $18.51 (Volt Month).
Frank Sherosky wrote on December 21, 2011 - 10:54pm Permalink
And what is the total cost of your Volt experience? We know the gasoline costs here, but how much is the monthly lease? Together, that is your monthly outlay. As the cost of your Accord is likely higher, you may indeed have a cheaper overall ride now, but that is not the case for those who can only afford a Honda Civic or a Chevy Cruze. But I bet that Accord seats more and perhaps rides better than that Volt. Thanks for commenting!
Anonymous wrote on December 21, 2011 - 11:50pm Permalink
The 240v charger was ~$350 installed and my annual electric bill according to Edison will be an additional $600/year. My lease is $480/month because it has every option. Leather, Nav, Backup Cam, Upgraded Stereo, etc... The other car I was comparing it to is an Acura TSX which would have been about $350/month. Another issue is that the Volt lease is a 12,000 mile/year lease while all of it's competitors advertised leases are 10,000 miles. At 20 cents a mile that becomes an additional offset. The Accord was my kid car. I also unloaded my 2006 Carrera 4s. I was actually very disappointed by the Accord. (Loved the Porsche!). I didn't buy the Volt because I'm a green freak. There was just NOTHING that excited me in the low $30K range. The G37 is long in the tooth, Small German cars aren't my style, the Acura TL is ugly, the Acura TSX is nice, but I'm not a fan of 4 cylinders. Honestly, the car I liked most in the price range is a Ford Edge but it's just too minivan for me. The Volt is superior to my Accord in every way, except space which isn't an issue for me. But the panel gap, design, interior, style, quality of parts, etc... are all better in my opinion. Without a doubt, the Volt doesn't make sense when you compare it to a honda civic. But, if you actually drive one, you will realize it competes with low $30K vehicles in options, quality, and is pretty. Not to mention, it has a ton of torque, so while it's not a drag racer, I enjoy driving it. I didn't intend to buy a green car. It just made sense for me and I liked it. The technology is sound and it is an oil cartel breaker. I can imagine this technology being used to make liquid natural gas vehicles enjoyable to drive. They don't have enough burst power, but could keep a battery topped of nicely. Like all things, there are compromises and people may not like it. But, as someone that fell for the car, I think it's getting pretty obvious that the oil companies are trying like crazy to kill this car.
Anonymous wrote on December 22, 2011 - 3:31am Permalink
I'm looking at a chart of year over year US oil production from a approximate high of 9 million barrels of oil in 1980 to about 5 million barrels of oil today. Another chart would show the rising price of gas year over year during the same period. Appears we are extracting a lot of oil now from the Canadian oil sands and deep deep under the ocean as most of the easy accessible oil is gone. Producing oil from such places as Canadian oil sands must produce vast amounts of green house gases as it would appear to be terribly inefficient. The US with it's addiction to cheap oil and gas will need to switch to alternatives at some point in order to survive. It seems the sooner the US can switch from using diesel in big trucks to LNG and cars can be electrified it would save some of this oil for things that are needed such as producing plastics etc... I think any sane person would have their pants scared off of them if they could figure the implications of no energy plan in the US except drill baby drill? If interested in the facts just search for year over year oil production.
Frank Sherosky wrote on December 23, 2011 - 1:18pm Permalink
I just released a new article as this subject has expanded: http://www.torquenews.com/119/chevy-volt-vs-cruze-cost-comparison-not-appreciated-some-volt-owners

Panasonic Updates Profit Forecast, Noting How Much Tesla Batteries Help The Jump
2022 Porsche 911 GT3 Laps Nurburgring in 7:04 With Journalist Behind The Wheel
END_OF_DOCUMENT_TOKEN_TO_BE_REPLACED