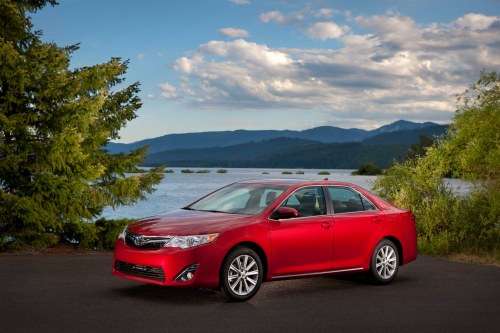 Despite all the claims by Toyota Motors (NYSE: TM) that the 2012 Toyota Camry is the most American of cars and designed from the ground up, it surely lacked the vision and gutsy marketing with its conservative, single-fuel capability.
Advertisement

Think natural gas; think diesel. If there was ever an opportunity for a new automobile release to make a bold statement, the launch yesterday of the 2012 Toyota Camry missed one significant mark that is becoming more and more important to American drivers - fuel choice.

In light of high prices for gasoline that is often held hostage to high oil prices around the globe, there was no mention of any natural-gas or even a diesel option. It appears Toyota has chosen once again to play it conservative and not rock its own boat by staying fully gasoline; and that appears to be an opportunity missed.

No doubt, Toyota is leaning toward electrification as its “other” fuel choice in the form of a hybrid for the 2012 Camry. That, however, has a nasty side effect called a cost premium, even more than any premium for a nat-gas option. However, a nat-gas fuel option is not as technologically intense; and would have sent a distinct message that Toyota gets it and understands America's needs.

Further consider the vehicle is touted as an all-American car with the most American-part content of just about any vehicle; and the proud claims that it was redesigned from the ground up, a simple technology review of the 2012 Toyota Camry engine and fuel combinations simply reveals a black hole. If it hadn’t been a new design, nobody would think much of it; and perhaps say, “Oh, next time.” Well, next time is here, right now, not 2016 or 2025!

Point is, despite a safe exterior, the lack of vision centers on the decision to not include a dual-fuel capability, a key expectation in light of present energy and economic circumstances in America.

Toyota had the golden opportunity to lead America here in the area of dual fuel and failed.

Do not take this wrong. The 2012 Toyota Camry looks to perform well as it was designed. I have no qualms about that. However, the Japanese firm failed to realize that with much hype comes high expectations; and in this case, styling surely didn’t impress anyone. So, the only thing left was the technology, especially as it pertained to engine efficiency and fuel choice.

This is what I meant when I wrote, Toyota stock investors look to a flawless launch of 2012 Camry , in the Auto Stock Sector segment here at Torque News. And the article, Toyota stock needs the 2012 Camry to be a hit. Click Here, now!

Be apprised that investors as well as potential customers are also looking for a bold design, not just safe, which the exterior exhibits. Perhaps they could live with that for now, but not when it comes to the engine and the options for fuel, in light of the country heading toward cleaner fuels with greater availability and cost advantage.

Granted, only Honda has a real natural-gas option, even among GM and Ford. However, Chevrolet at least had the vision to bring a diesel option for the 2013 Chevy Cruze, which is used already in Europe.

Toyota, especially with the Camry, has always had a fuel efficiency advantage with its engines in America; and that’s what’s puzzling here. With a new car offering like the 2012 Toyota Camry with so much hype in light of the 2016 mileage mandates just around the corner, one would think an option to enable natural gas as potential fuel seemed logical and forward thinking.

Again, from an exterior view, the styling of the 2012 Toyota Camry is so safe that it’s bland, in this writer‘s opinion. Having worked in a design studio, I know bland when I see it. Yet, why didn’t Toyota exhibit that same safe attitude when it chose the drive train and fuel options in its marketing plans?

Still, the Toyota Camry has been the bestselling car in America 13 of the last 14 years. Questions are: With new features, a new look and lower prices against a growing list of competitors like the Chevy Malibu, can the 2012 Camry lineup maintain its position in America? And will it drive sales sufficiently to halt the fall of the stock price?

Don Bain wrote on August 26, 2011 - 3:56am Permalink
Frank: I greatly respect your knowledge and coverage of the stock market aspects of auto manufacturers, but on this point you couldn't possibly farther off base. The Sequoia is a flex fuel vehicle and there's a good reason for that. To put a multi-fuel capability into a Camry would be reactionary and stupid. You seem to think there's a future for and have drank the kool-aid of the clean diesel myth. And that anything other than fleet vehicles will run on natural gas. Wake up my valued colleague, the future is electric and solar. And Toyota knows it.
Frank Sherosky wrote on August 26, 2011 - 9:57am Permalink
For some reason many think all I write about are auto sector stocks. Fact is, I do write many auto technology articles considering I'm also an engineer. Regarding electrification, I do not doubt that is the direction, and that will ultimately lead to hydrogen and fuel cells. The challenge centers on battery technology which at present does not have the energy density to meet our daily needs at this time; meaning, still not ready for prime time at a cost that the masses can afford. I also know that the vast majority of propulsion technologies going into 2017 and 2025 will still be based on the IC engine. Now, it's either give everyone a raise so they can afford fully electrified cars, or make IC engines cleaner and ready to use more abundant fuels like nat-gas. Granted, the Bakken oil find will take the load off of oil imports, but part of that find also includes natural gas. Point: an abundant fuel source like this will not be wasted, and it will be cost competitive. Flex fuel as it stands today is dependent on the food chain as in corn; bad idea by any stretch. Use of cellulosics would be better, but nat-gas is still cheaper by any stretch because it is more abundant and needs less processing. For sure, heavy trucks are heading into nat-gas as I write; as are many commercial vehicles. However, large cars and SUVs would benefit as well from this cheaper fuel. If you truly want Flex fuel, then nat-gas is still the cheaper choice. And regarding what Toyota knows, I suggest that they were behind GM in hydrogen and fuel cells until recently. Point: I saw them playing catch up until I saw their reports at CAR MBS2011. The company is leading, though, with the Prius, but even that has an IC engine. But do not get too complacent with full or even partial electrification, as the IC engine still has another trick up its sleeve with split-cycle and air hybrid technology.
Anonymous wrote on July 23, 2012 - 3:13pm Permalink
If they would make a diesel, I would buy that right away, a great fuel choice for a very good car,