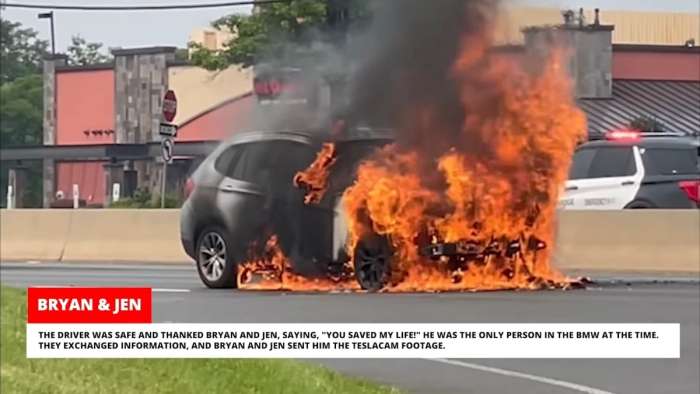 EV fires garner disproportionate attention from the media. However, the heroic action of a Tesla Model Y owner and his wife shows us, not only that ICE vehicle fires are common but, also how an EV can come to the rescue.
Advertisement

Since the very first electric vehicles, EVs have had disproportionate scrutiny when it comes to battery fires.

Electric vehicle fires, no matter the circumstance or isolated the incidence appears to be, garner worldwide media attention.

One recent example is a brand new Model S Plaid that caught fire in Pennsylvania. The incident garnered sensational media coverage claiming a Tesla was driving down the street autonomously while it was on fire.

Like most EV fires, this one also disappeared into the ether after a brief media circus. However, negative media coverage associated with battery fires still poses a real risk to EV brands. Reports of spontaneous battery fire have a significant chance of landing a death blow to any aspiring electric vehicle manufacturer.

The story of Fisker, which was Tesla’s biggest competition at the start of the last decade is a good example. The vehicle, after being announced as the original “Tesla Killer” went on to receive several celebrity endorsements.

However, a string of spontaneous battery fires coupled with bad luck has ended the company before it was able to get going.

Currently, General Motors is also reeling from a string of Chevy Bolt fires. The company has instituted a recall and is being investigated by the National Highway Traffic Safety Administration (NHTSA).

However, if we look at the numbers, internal combustion vehicle fires happen at a significantly higher rate than EV fires.

According to Tesla’s most recent annual Impact Report, in 2019 there were almost 190,000 vehicle fires in the U.S and they happen at a much higher rate in internal combustion vehicles.

Data from the National Fire Protection Association (NFPA) and the U.S. Department of Transportation says there is one vehicle fire per 19 million miles traveled. This is in stark contrast to Tesla vehicles where they experience a car fire once every 205 million miles driven.

However, if we look at the headlines Tesla and EV fires seem to be happening left and right. A recent Model Y dashcam footage is however one example of ICE vehicles catching on fire while an EV comes to the rescue.

Tesla Model Y owners Brian and his wife Jen were driving their vehicle in Woodbridge New Jersey when they pulled up to a light and made a right turn. They noticed smoke pouring out from a BMW in front of them.

At first, Brian and Jen thought the BMW was trying to roll coal them, but a moment later they noticed a flame under the car. When the BMW which was starting to catch on fire they realized that the driver hadn't noticed the fire.

The BMW driver put his vehicle in park and turned on the hazards and ran away to safety. Moments later the whole car was engulfed in flames and seconds after that the car exploded.

The driver was safe and thanked Brian and Jen saying you saved my life. He was the only person in the BMW at the time. They exchanged information and Brian and Jen sent him the tesla cam footage.

Due to Brian and Jen’s swift action, the BMW driver was saved from harm or even worse death. This is one typical example of the kind of story we are unlikely to hear from the media. Hopefully, this story will assuage the fear of anyone considering EVs but is afraid of fires.

Both EVs and ICE vehicles can catch fire however, it should be known that you are significantly safer in EVs than ICE vehicles.

This will be the first of a series of articles aimed to dispel the disproportionate association of EVs with fires. We will keep you posted as we get more noteworthy stories. Make sure to visit our site torquenews.com/Tesla for the latest information.

So what do you think? Do these types of stories change your mind about EVs and fires? Would you want me to do similar stories going forward? Let me know your thoughts down in the comments below.

Timothy Boyer wrote on September 15, 2021 - 9:39am Permalink
Good article and good point. However, call me jaded, but whenever any claim is made comparing fires between EVs and ICE vehicles (or anything involving numbers fed to the public) I tend to remember the old saying of "There are 3 kinds of lies---white lies, damned lies...and statistics." My point being is that data is often massaged or does not include the appropriate factors under true statistical analysis. My bet is that it is really not as simple of a comparison as we are led to believe when discussing fires and two very different vehicle categories. What I would like to see is an unbiased academic statistical analysis outside of Tesla and the NHTSA of what the numbers mean concerning the risks of an electrical fires in EVs; and, if this can really be compared to ICE vehicle fires. Anyone out there know of a reference? Thanks.