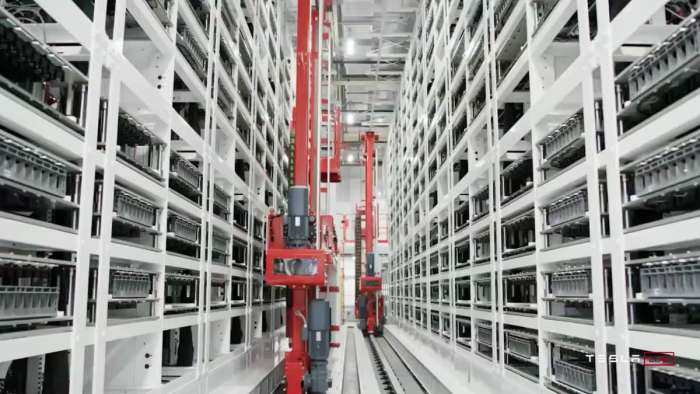 Breaking: Tesla Is Looking For Partners To Build 4680 & Possibly 4690 Batteries In China

A new report from China suggests Tesla is looking for manufacturing partners to produce the company's newest 4680 cells. The report also states Tesla's partners are working on a new 4690 form factory to supply the EV maker.
Advertisement

Tesla, at the company’s Battery Day event, announced it has achieved a battery chemistry and manufacturing breakthrough.

The new 4680 batteries, so-called due to their dimension (46cm by 80cm) include several improvements which add up to a significant energy density and cost improvement over Tesla’s already industry-leading 2170 cells.

Second, Tesla changed the anode material from graphite to silicon. Silicon’s chemical properties allow it to store significantly more lithium ions than graphite per a given mass. This once again means better energy density plus lower cost since silicon is basically sand and is widely and easily available.

The third is, Tesla increased the batteries size. This has allowed Tesla to decrease the weight of inactive materials such as the steel cans which hold the active material inside them. This also has improved the energy density.

Related news: Tesla has received Approval From The Indian Government To Sell 4 Of Its Vehicles

These are just a few examples of how the new 4680 batteries are better than the 2170 cells. However, you can read a full rundown of all the improvements Tesla announced at the Battery Day event in my previous article.

As of now, Tesla has not yet shipped any vehicle with the 4680 batteries. According to the EV maker’s Q2 2020 earnings call, Tesla is still working on few issues before the company can consistently mass-produce the new battery cells.

Tesla is currently ironing out the production process at the company’s Keto Road facility close to its Fremont California plant. And once everything is sorted out, Tesla is expected to begin volume battery production at the company’s mile-long Texas Gigafactory and the currently under construction Giga Berlin Battery factory.

It has also been mentioned in the past that Tesla is working with Panasonic to help set up a test production line to see if the latter is able to produce the new 4680 cells.

As of now, it’s not yet clear if Tesla will be sharing all of the company’s breakthroughs with Panasonic so that the Asian giant will be able to produce identical cells to those that will be produced by Tesla.

However, now we have a new report from China stating Tesla, in addition to its in-house production, is also in talks with Chinese battery manufacturers to produce the new 4680 cells.

The report comes from kr36.com, which is a Chinese news site that was able to talk to industry insiders in the country.

According to kr36 “Tesla has begun to look for cooperative manufacturers of 4680 large cylindrical batteries in China. In addition to the original battery suppliers CATL and LG Chem, Tesla is also in negotiations with Yiwei Lithium Energy and other battery manufacturers to produce the new cells.”

The kr36 report says, based on insiders the news site was able to talk to, Tesla is looking to design the 4680 cells and contract the battery manufacturers to handle volume production.

As for when we can expect new 4680 cells produced by Tesla’s Chinese battery manufacturing partners, kr36 says based on their sources “this cooperation is still in the early stages. The 4680 large cylindrical battery is a new technology, and the general rhythm of the industry is to start mass production in 2023.”

Related news: The Tesla Cabin Camera Has Its Highs And Lows

Kr36 says, they contacted Tesla China to make sure the information was accurate, however, the company declined to comment.

Still, one individual who was willing to give a comment on the record was Ji Yajuan, director of the basic materials and technology research office of Yiwei Lithium Energy.

From kr36’s reporting it was not clear if the 4695 batteries were also for Tesla’s consumption or if they are simply Yiwei Lithium Energy’s internal project. However, LG Chem seems to be working on a new form factor, 4690 cells, specifically for Tesla.

According to an unnamed source “LG Chem has developed large cylindrical batteries, 4680 and 4690, one after another, hoping to enter Tesla's supply chain again.”

This is the first time we have heard of 4690 cells, we don’t know why Tesla has decided to have 2 form factors or if Tesla is planning to replace the 4680 cells with 4690 cells. But, we will be sure to keep you posted as soon as we hear more information. Make sure to visit our site torquenews.com/Tesla regularly for the latest update.

So what do you think? Excited Tesla is in talks with Chinese manufactures to produce the 4680 cells? Also, do you think Tesla is looking to replace the 4680 form factor with 4690 cells? Let me know your thoughts down in the comments below.