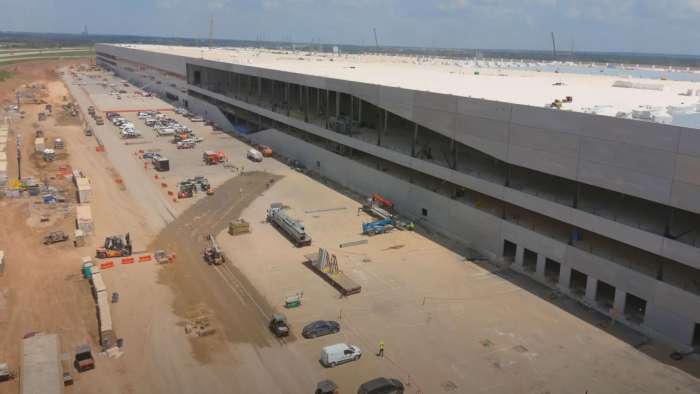 We have some stunning aerial footage in Tesla Austin Texas for its Giga factory. Let's take a look and see the progress since inception and what we can expect going forward
Advertisement

We have stunning aerial footage of Tesla Austin Texas and its Giga factory. Some even think there is a CyberTruck emblem being put on one of the walls at the Giga factory. Let's take a look at the footage and see what's going on.

Thanks to Dessie Doolan in the comments of the video for this information!

There is a north side storage area. Are the painters drop sheets being removed? The area is being cleaned up and possibly moved to the frame assembly area.

There is an east side storage area. There are more extra long columns.

There is a skunkworks area at the bottom right with precast wall panels laid out for a floor.

There is a north alleyway with a geodesic frame going up.

There is a casting/paint gap. The columns are being welded together. The UC (Universal Column) are being plated and bolted.

There is casting and another indication of how thick the slab is. The orange traffic control barrier is twice as high as the slab is thick. 18 inch and 450 mm slab.

There is a north alleyway with geodesic frames. Further south is seen the bunker roof that has been stripped of the membrane and insulation and what appears to be a couple of roof kerbs/upstand installed.

The are geodesic frame and the diameter of the components varies. Some lower members in the center are larger. Something could be suspended from a frame here, like a track.

There is a battery west side, bottom left, inside to the right of a loading dock. There are fire sprinkler control valves.

There is a south end of GA with the last column bay longer than the others.

There is an east side GA, left of the screen. There is a great pile of concrete and what looks like ripped apart drain pipe. Could be due to change of plans.

There is a south alleyway north end of a pit. Could this be squaring up the excavation for some footing pads? There is stack of form plywood to the right built up a ramp at the north end.

There is a group of 9 piles in the excavation to the right.

There is a bunker roof getting a rework.

There is construction still happening and likely will continue for quite some time even when the Giga factory becomes operational.

Some have speculated that there is a CyberTruck emblem being created on the side of the building. We'll have to wait and see how construction progresses to see if that is really true or not.

What do you think of this footage of Giga Austin Texas? Are we on track for delivery of vehicles by the end of 2021?