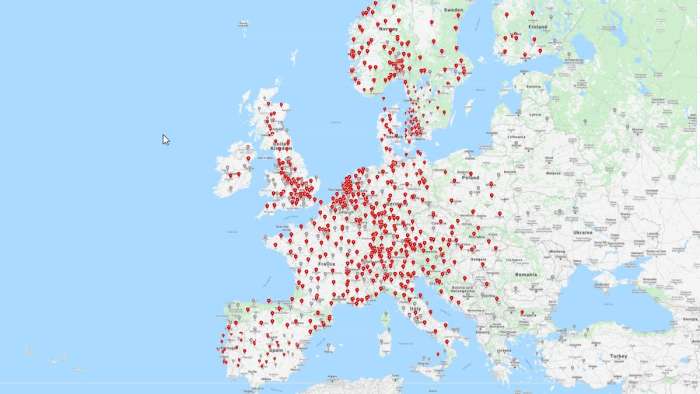 In this article, I’ll cover how Tesla is offering free supercharging to any EV owner in Europe that has a CCS2 plug at selected superchargers in Europe. I’ll describe why they are doing that and how I expect this to evolve as Tesla greatly grows their market share in Europe over the next few years.
Advertisement

This is due to a EU law that requires new charging stations to have at least 1 or 2 stalls compatible with any #EV pic.twitter.com/VInUUxh9o5

In this short twitter thread, twitter user TeslaStars reports that some Tesla supercharger stations now offer free supercharging to all brands of electric vehicles (EVs). Elon has long invited other manufacturers to join Tesla’s supercharger network, but he has always had the stipulation that the competing automakers would need to pay, not just for the electricity to charge the cars, but also to contribute capital to the building of the Supercharger stations. So why would Tesla offer free charging to competing EVs without any agreement with the manufacture of those cars? TeslaStars thinks it because of a European Union law that requires new charging stations to provide at least 1 or 2 chargers that will charge any brand that has the CCS2 plug that is the European standard.

As we report on almost daily, Tesla is working at unprecedented speed to build a gigafactory in Berlin. In our latest article on the subject, we describe how they are getting ready to receive their final permit. But in order to fulfill Tesla’s mission to “accelerate the world’s transition to sustainable energy”, Tesla needs to do more than build cars, they need to ensure owners have a convenient and reliable place to charge the cars when the owners decide to take a long trip and can’t just use the electricity from their home. When Tesla chose the CCS2 charge port for the European Model 3 about a year ago, they set up a situation where their owners could charge not just at Tesla superchargers, but at the many other charging stations. The flip side of that is allowing other cars on their network. It appears the new EU law required Tesla to open up their charging stations before they were ready.

When you go to charge an electric car, there are 3 ways of paying:

1. If you go to free chargers, you just plug them in and your car starts charging. You don’t pay for anything. These are usually slower chargers by hotels or other businesses that install them either for an incentive or in hopes of attracting the affluent EV client to their business.

2. You use your credit card to pay for charging. Most stations also require you to signup for an account (usually free and immediate) to charge on their network. EV owners complain that they have to sign up for many accounts if they charge in a lot of different places.

3. The way Tesla superchargers work is you just plug them in and if your car is authorized, it charges. The car has a unique identifier, so Tesla knows who plugged in. Tesla has your credit card on file and charges your credit card. The chargers don’t even have a screen, since any messages they need you to see they can be sent to your car.

It doesn’t seem fair that the other EVs get free charging while Tesla EVs have to pay. Right now, the other EVs have to pay with their time. Since only 1 or 2 chargers at each location are set up for this, there could be a long line. There are many Tesla only chargers at each location, so most of the time, no waiting is required.
I expect Tesla to figure out a way to charge owners of non-Tesla EVs in the future. They could either read the vehicle ID from the CCS2 port and only provide charging to those that have given their credit card to Tesla or they could install a credit card reader on their chargers as most other chargers have. Given Tesla’s preference for software-only solutions where possible, I think they will do the former.

This is an important step in making the charging network in Europe work well for electric vehicle owners of all brands of cars. Now Tesla just needs to update their software to make sure the non-Tesla vehicles pay their fair share of the costs.

Model Y Pricing In Europe, Analyzing Why It Could Be Less Than You Think

Timothy Parker wrote on September 12, 2020 - 3:33pm Permalink
I don't understand TeslaStars reasoning: EU requires 1 or 2 universal chargers, so Tesla makes all the chargers universal at some stations, and free? I don't think this follows the rules of logic. Maybe they just want other EV owners to take a close look at Tesla EVs and talk with Tesla owners while they are charging their non-Tesla car. It could be just a way of marketing Tesla cars.
Accent wrote on September 13, 2020 - 3:38am Permalink
I won't be happy if this means a queue at superchargers. Many European superchargers are already quite busy, especially in holiday season.