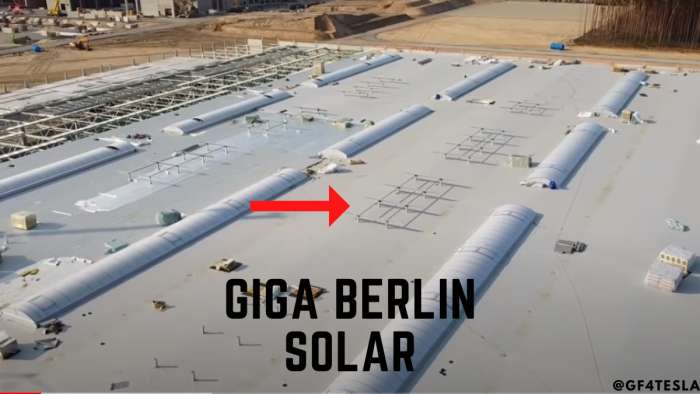 The first Gigafactory to utilize solar power was Gigafactory one, in Nevada. Only a couple of days ago, Tesla began installation of solar water heating panels in Shanghai.

The aim of this is to produce vehicles using as much sustainable energy as possible, reducing Tesla's carbon footprint.

It seems that in Giga Berlin, preparations are being made for the fitting of solar to the factory roof.

In this picture from @Gf4Tesla's latest video, some metallic structures have gone up that resemble mounts for the panels, and these seem to match those used by Goldbeck Solar, a German solar energy provider based in Hirschberg, about 200 miles away from Giga Berlin. 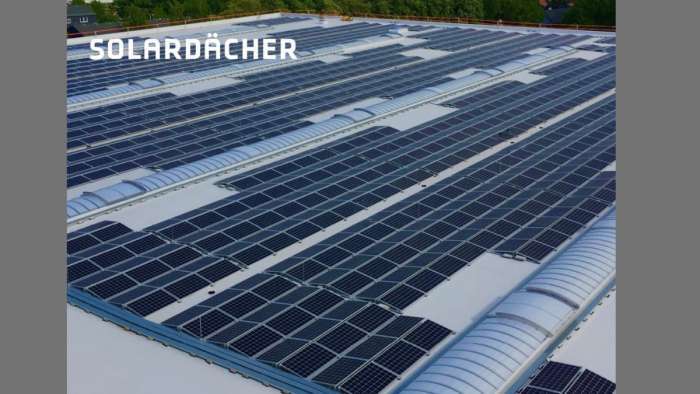 As you can see in this picture from Goldbeck Solar, the installation looks similar to that of Giga Berlin.

Tesla has stated that its goal over time is to have its factories completely powered with solar energy. In Giga Nevada, the number of panels on the roof seems to increase every year, with the goal of eventually covering the whole roof with photovoltaic panels. 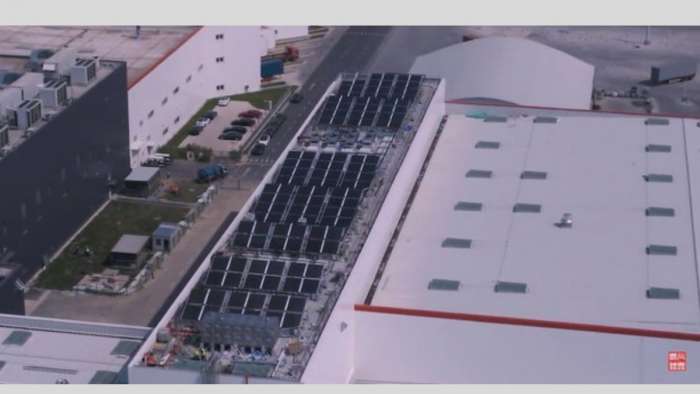 The new solar panels in Shanghai

Meanwhile, in Shanghai, the panels have only been installed on a relatively small proportion of the factory roof. The Shanghai panels are for heating water, unlike the Giga 1 and the Berlin predicted panels.

Although solar panels are good for reducing carbon emissions, their manufacturing is not a green process: it creates a lot of waste such as liquid and gaseous by-products that are harmful to the environment.

Firstly, extracting quartz, the crystalline form of silicon, and of the other materials necessary for the construction of the panels. Furthermore, for the production of metallurgical silicon, huge furnaces, and very high temperatures are needed. Most panels are built in China, using fossil fuel to meet the energy needs required for production.

If Tesla really wants to achieve fully sustainable energy production, it will need to take into consideration the sourcing of the panels and ensure that they will be properly recycled once they reach the end of their useful lives.

Goldbeck Solar seems to be relatively forward-thinking with the manner they produce their energy production solutions, you can see for yourself on their website.

The question remains whether the panels will be installed before or after the construction of the factory buildings is completed. Will Tesla eventually switch to their own solar products?

It seems likely that the energy storage solutions used will come from Tesla since they are one of the most advanced energy storage providing companies. Tell us what you think in the comments and if you can't get enough of Tesla here is a link to some more news.

Consider subscribing to our Youtube Channel for daily Tesla updates

David Zarembka wrote on September 12, 2020 - 11:14am Permalink
The solar "panels" in Shanghai are for hot water heating and not electricity generation.
Guillaume Humbert wrote on September 12, 2020 - 1:22pm Permalink
Thank you, correction made
Phil Roberts wrote on September 12, 2020 - 3:37pm Permalink
The process for making solar panels is not an energy intensive one when looked at over a lifetime, depending on manufacturer energy payback is usually in 2-5 years depending on where the panels were made. Panels will produce energy for 30-40 years so are vastly energy negative. The panels on Shanghai roof however do not look like Solar Photovoltaics they look more like solar thermal. Especially given they are on the plant room roof and there aren’t that many of them, I suspect they are for process hot water or maybe for an evaporative cooling system