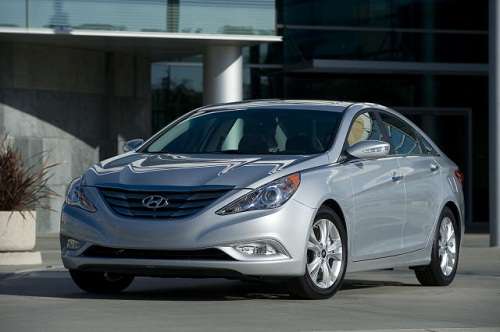 Four recent awards for the 2011 Hyundai Sonata add up to wide-ranging praise for the mid-size family sedan. Hyundai touts other independent measurements that show steady gains for the auto brand as a whole.
Advertisement

Hyundai Motor America is growing rapidly, but with U.S. retail sales of about a half million vehicles through November, it still resides in the middle tier among American auto retailers. Yet Hyundai already belies its size with weighty awards and recognition received from independent automobile publications and organizations – a noteworthy feat for a 2011 lineup of nine passenger cars and crossover wagons.

Consider the 2011 Hyundai Sonata, a midsize family sedan that competes with some of the hottest selling passenger cars available, including the Toyota Camry, Honda Accord and Ford Fusion. The praise Sonata wins as an individual model fortifies the accolades that Hyundai Motor America is receiving as a brand.

On this site I recently reported that a consumer study by Brand Keys of New York shows that Hyundai wins more customer loyalty than any other auto company, including the big-name luxury brands BMW and Mercedes-Benz (see the article at http://www.torquenews.com/113/hyundai-first-customer-love). As if to underline that study's findings, the Hyundai Sonata recently received four noteworthy awards. Naturally, Hyundai Motor America is eager to promote those distinctions in press releases. Dispatches from Hyundai tell us the following.

The Sonata is one of 10 Best Cars for 2001 by Car and Driver magazine, which Hyundai calls “the world's largest automotive enthusiast publication.” This is the first time a Hyundai model won the award.

In announcing the prize, Hyundai press material explains that the Car and Driver award seeks to recognize the best autos sold in America for less than $80,000. (The Sonata starts just under $20,000.) The car maker quoted Eddie Alterman, the magazine's editor-in-chief: “In our testing, we are looking for those automobiles that deliver spectacular value, real driver engagement and the highest fulfillment of their intended missions. It’s a real workout and only the best cars on the market emerge victorious.”

A week before the 10 Best award was announced in November, Hyundai reported that Consumers Digest magazine had named Sonata a Best Buy in the family car category. The car company's press release notes that “the Automotive Best Buy Awards reflect Consumers Digest's view of which 2011 vehicles offer exceptional value for the money.” Information on the program is available at Consumersdigest.

Also in November, Hyundai boasted that Sonata was named Best Car to Buy 2011 by The Car Connection vehicle-shopping site. Hyundai noted that its model topped the numeric ratings of vehicles with a base price below $50,000. In field of 40 nominees, Sonata's top finish put it ahead of luxury models Acura TSX, Infiniti M37, and BMW 5-Series, the company reported.

Finally, in mid 2010, the 2011 Sonata received the first ever President's Award from the automotive marketing consultants AutoPacific. The honor was based on the results of an AutoPacific study that asked owners to rate their vehicles in 48 categories, including comfort and convenience, performance, and environmental responsibility.

A Hyundai press release announcing the award cited George Peterson, AutoPacific president, as saying, “quite frankly, we were blown away by the results. The sheer magnitude of the 2011 Sonata’s score made recognition necessary. With a score of 775 out of 1,000, the Sonata exceeded everyone’s expectations. The Sonata’s unique styling was rated almost perfect and was a key driver to its overall superior performance in this research. Clearly, 2011 Hyundai Sonata drivers are extremely satisfied with their purchase.”

While Hyundai beats the drum for Sonata, it also highlights other achievements for the overall brand. In recent press announcements, the company reported that it advanced seven places in the J.D. Power and Associates U.S. Sales Satisfaction Index Study, moving from number 16 in the 2009 ranking to number seven in 2010. The advancement represents the greatest gain among mass-market car brands, Hyundai said. The Sales Satisfaction Index Study attempts to measure how well customers are treated by dealerships.

In an earlier press release, Hyundai announced that KBB.com of Kelley Blue Book had named the auto company one of the five most considered brands in the second quarter of 2010. Kelley's Brand Watch report gave Hyundai 29 percent of the consideration car shoppers granted to models in the non-luxury, coupe/sedan/hatchback segment. That figure placed it above such larger competitors as Nissan, the company stated.

At about the same time, Hyundai Motor America noted that the German car magazine Auto Bild granted Hyundai the top spot in the publication's Quality Report 2010. Based on the results of consumer surveys and other criteria examined by Auto Bild, the top ranking placed Hyundai above Toyota and the German luxury brands Audi and BMW, the car maker pointed out.

Added together, those awards and others look like a formula for a mid-tier company to become much larger.