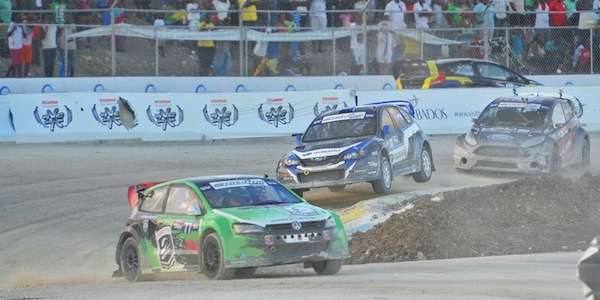 The bad news is, the first Red Bull Global Rallycross Top Gear Festival Barbados last weekend was not shown live. The good news, it will air as a tape delay tomorrow May 24, 1-2PM ET, on NBC. Many haven’t read about what happened at the first GRC race and are waiting to see the broadcast. If you don’t know the results of the race, don’t watch the highlight video of the exciting action below.

GRC race fans can watch the whole race tomorrow on NBC thanks to a new agreement that Red Bull Global Rallycross made with NBC. The Red Bull Global Rallycross championship has joined the portfolio of motorsports series in the NBC Sports Group family of networks for 2014. Most of the 10 races will be broadcast live except for this first one from Barbados, and last two in September and November.

GRC is one of the most exciting motorsports events on the planet. Colin Dyne, series CEO said in February at the announcement, “This is a great step forward for Red Bull Global Rallycross. Partnering with NBC will allow us to bring our events to millions of our existing fans, and welcome new fans as well. We look forward to delivering unparalleled, high-octane race action.”

This first GRC race from Barbados that ran last weekend, featured lots of action and brought a great lineup of drivers and teams and possibly the most exciting racing action on the planet. If you want to catch a few highlights and one spectacular crash before you watch the full race tomorrow, watch the video below. Otherwise, tune in Saturday for the Top Gear Festival Barbados 1-2PM ET, on NBC.