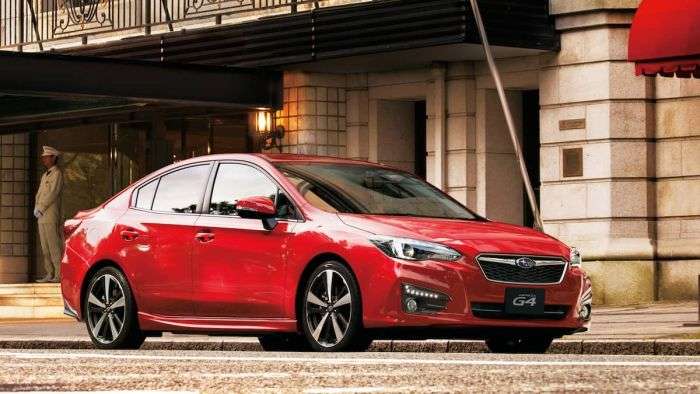 You Can Still Buy a New 2WD Subaru Impreza In Japan

Did you know Subaru still sells a 2WD Impreza? Subaru celebrates 60 years in Japan with a special 2018 Impreza Sport.
Advertisement

Subaru is known for an entire lineup of vehicles that come standard with all-wheel-drive. But consumers can still buy a 2WD 2018 Subaru Impreza in the home country. Subaru is celebrating their 60th anniversary in Japan with a special Impreza Sport. It’s surprising Subaru still produces a two-wheel-drive Subaru Impreza when it's their popular all-wheel-drive system that sets the brand apart from all other automakers.

Subaru offers the 2018 Impreza Sport G4 in either 2WD (front-wheel-drive) or AWD for consumers in Japan. It still rides on the same new Subaru Global Platform, but the Japan-spec Impreza can be had with front-drive or all-wheel-drive configuration. In Japan, it also comes with a smaller 1.6-liter 4-cylinder Boxer engine coupled with the Lineartronic CVT transmission.

It’s different in the U.S. where the only model without all-wheel-drive is the rear-drive BRZ sports coupe. In 1996 in the U.S., Subaru’s parent company Fuji Heavy Industries decided to make its All-Wheel-Drive system standard equipment on all their Subaru vehicles. It was a move that proved to be brilliant for the small Japanese automaker.

At the time, it was a risky move when all other small Japanese cars were fuel-efficient front-drive cars. AWD became Subaru’s calling card and it became a core value for the small Japanese automaker. Subaru Corp developed their AWD system that would help its rally success of the 90’s called Symmetrical All-Wheel Drive. The system splits the torque nearly perfectly between the front and rear axles, helping it corner and handle like a rear wheel drive car.

The Impreza line is perhaps Subaru’s greatest achievement in their 60-year history. Because the Impreza was an extremely versatile “economy” car, it allowed them to compete with companies like Toyota and Honda with their Corolla and Civic respectively.

Today in the U.S., their Outback, Forester, Crosstrek, Impreza, WRX/STI and Legacy only come with all-wheel-drive. It’s surprising in 2018, Subaru still offers Impreza with a 2WD variant. Subaru still makes a front-drive version of their popular 2018 Impreza Sport for their home country customers. It is cheaper than the AWD version, so we assume it’s a good seller.

Big Engines wrote on February 26, 2018 - 12:16pm Permalink
I almost visit Subaru japan website more than 100 time! Not big different between AWD and FWD in 2.0L engine, the real different it's in 1.6L engine that's all, the 1.6L engine is 17 kilometers per liter with AWD but it's 18.2 kilometers per liter with FWD, the 2.0L engine is 16.8 kilometers per liter with AWD but it's 17 kilometers per liter with FWD! (With 17 inch wheels) Not much different, the really thing i want to see on Impreza and Crosstrek is making additional engine 1.6L DIT (direct injection turbo) with 167hp and 250 N . m (184 lb ft) which is standerd in Subaru levorg and stronger, better fuel economy from 2.0L naturally aspirated engine, same way with Honda civic with 1.5L turbo
Randy sauter wrote on November 12, 2019 - 7:42am Permalink
I would buy a Subaru 2-wheel drive or a four-wheel drive in a minute but not in all-wheel drive. Tire maintenance alone would be a pain in the neck, you can't just buy one tire if one goes bad you have to buy all four on an all wheel drive.I don't think they could keep them on a sales lot if they made a two-wheel drive or a four-wheel drive.I owned a Subaru brat years ago it was the best car I've ever owned,if the body didn't rot off it it would still be running today.
Cam wrote on November 19, 2021 - 9:22am Permalink
We have the FWD version in my country also, not just Japan. I would like to know the weight but can’t find it anywhere. The AWD version in n/a Impreza of 148bhp will be too underpowered for many.