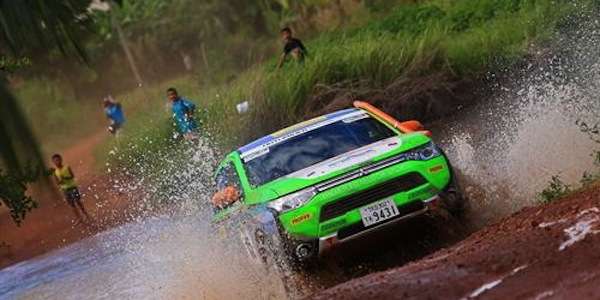 The Mitsubishi Outlander PHEV plug-in hybrid wins a key rally race. How will this effect the 2015 Lancer Evolution successor?
Advertisement

If you think Mitsubishi is finished with global Rally racing, take a look at what they just accomplished at the FIA-certified Asia Cross Country Rally 2014. A 2014 Mitsubishi Outlander PHEV plug-in hybrid electric four-wheel drive SUV has just won a very important rally race. Mitsubishi Motors Corporation (MMC) entered the Outlander PHEV plug-in hybrid to test its systems for future technology that will be passed on to the 2015 Lancer Evolution successor.

Mitsubishi entered the Outlander PHEV into the Asia Cross Country Rally 2014 in the T1E class (electric vehicle class) and came away with a first place finish in the grueling rally race. The rally team, managed by Two & Four Motor Sports, completed the rally in 19 hours 17 minutes and 12 seconds for the total driving distance of 1986km under rough course conditions, winning first place in the class and 14th place overall. The race was run from August 9-15.

The Outlander PHEV has now competed in and completed this Asian rally two years in row. Mitsubishi’s goal is to show how their technology can withstand the severe road conditions that this Asian rally inflicts on the participants. And winning their class now proves MMC’s outstanding levels of reliability, durability and all-terrain performance as well as proved the Plug-in Hybrid Electric Vehicle (PHEV) powertrain is durable even under these severe road conditions. MMC will also use the data collected to be passed on to the new-generation 2015 Mitsubishi Lancer Evolution’s powertrain.

Outlander PHEV gets other modifications

The reason Mitsubishi has entered this Asia Cross Country Rally 2014 is primarily to collect more valuable data for use in their future electric vehicles. MMC brought a team of engineers who provided technical support for the Two & Four Motor Sports rally team, headed by Kenji Ishida. MMC is being very secretive of the next EVO but we know this valuable data collected will be used in the new-generation 2015 Mitsubishi Lancer Evolution successor. Stay tuned to Torque News for the latest Lancer Evolution news.