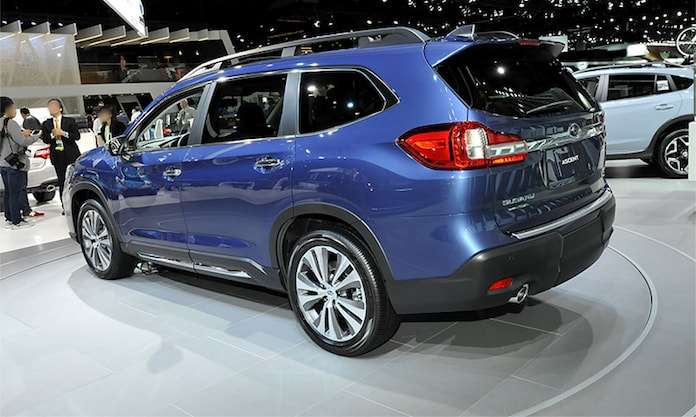 Why New Subaru Ascent Has Huge Jump In Shopper Interest

The all-new 2019 Ascent 3-Row crossover is the largest vehicle Subaru has ever built and it’s designed just for Americans. Ascent won’t arrive until next summer in the U.S. and Canada, but it received a huge jump in shopper interest from the LA Auto Show. According to a report from Jump Start Automotive, the new Subaru Ascent family hauler was one of the new vehicles getting a big lift from its debut.

Subaru chose to unveil the all-new 2019 Ascent at the LA Auto Show that ran from December 1-10 at the LA Convention Center and it paid off big for the Japanese automaker. Consumers could get a good look at it and even sit inside.

According to the report, new data shows auto shows are having a bigger impact on consumers’ shopping than in the past. Jumpstart says auto shows are now “less about concept cars that rarely make it to mass production, and more about showcasing technology and innovation found in cars that are available to consumers.”

Subaru Ascent gets a 107 percent boost

Jumpstart says there were only three vehicles with a bigger jump in shopper interest that made their debut at the LA show. Jaguar XJR (+195%), Infiniti QX50 (+142%), and Chevrolet Corvette (+113%). The all-new Subaru Ascent family hauler had a 107 percent lift in share of shopper interest from October to November. That’s a big lift for the brand as they will sell it only in North America. The Detroit News said the new Ascent was one of the 10 best new vehicles on the floor.

Shoppers who attended the LA show got a good look at Subaru’s new flagship all-wheel-drive vehicle even though it won’t be in showrooms until next summer. They could check out Ascent’s standard EyeSight driver assist technology, X-Mode, 8.7 inches of ground clearance, and its 72.6 cubic feet of cargo carrying ability. Inside shoppers saw 19 cupholders, 4G LTE Wi-Fi, 8 available USB ports, heated and ventilated front seats, rear-seat climate control and 2nd and 3rd row sunshades at the show.

Ascent will compare favorably in size and V6 power to Ford Explorer, Honda Pilot, and even the Chevy Tahoe. The new 2019 Subaru Ascent will be built at the Subaru Indiana Automotive (SIA) plant in Lafayette, Indiana alongside, stablemates Outback, Legacy and Impreza models. Subaru COO Tom Doll, said at the unveiling in L.A., the family hauler will hit dealer Subaru showrooms in summer of 2018. Subaru expects it to be a big hit with families, and the new 3-Row crossover just got a huge lift from the LA Auto Show.

At Torque News we value your opinion. Let's discuss it. What do you think about the all-new Ascent 3-Row? If you liked this article and think it may interest your friends, consider sharing or tweeting it to your followers.

Armen Hareyan wrote on January 23, 2018 - 9:59am Permalink
The new Subaru Ascent looks like a very nice SUV. No wonder it gets a 107 percent boost.