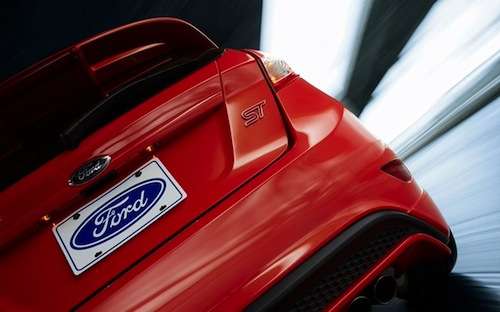 Tanner Foust takes on the Nurburgring in the 2014 Ford Fiesta ST and comes away thoroughly impressed.
Advertisement

Is there a better driver than Tanner Foust to drive the all-new 2014 Ford Fiesta ST and take on the Nurburgring? Foust is a two time Global RallyCross Champion, two time Formula Drift Champion, three time X Games gold medalist, and TopGear America TV host. You can’t find a better driver who knows performance cars and how they should handle under extreme driving on the track. Foust blistered the Nurburgring and we have a video of him showing the driver in the new Fiesta ST and his reactions. What did Tanner Foust think after he took on the famous German Nurburgring?

Well, he couldn’t have been more impressed. Foust gets in the hot hatch and takes off for his test drive on the Nurburgring. He is seen with another car that is close on his heels. But after he gets comfortable with the ST’s performance and handling, he takes off and pulls away. It shouldn’t be a susrprise that Foust likes the Fiesta ST. Because the performance Fiesta ST sprints from 0-100 km/h in 6.9 seconds, and has a top speed of 220 km/h (137 mph).

Foust can feel Ford’s new EcoBoost engine technology that produces fantastic results in power and handling on the track. The 1.6-liter turbocharged EcoBoost 4-cylinder produces 182 PS (197 horsepower) and 214 lb-ft of torque, and at the same time delivers 47.9 mpg (European combined). The small performance compact also offers performance-tuned steering, suspension, brakes and enhanced Torque Vectoring Control. Foust experiences all of it at the Nurburgring.

Foust knows performance and the Fiesta ST surprised him. His reaction after his blistering run around the famous German track says it all. Foust says, “Wow!, that was unbelievable really. It was not totally unexpected because it is an ST, but Holy Cow!, it’s like it just keeps pulling, the sound, the brakes when I thought it might be too much, the ST would just tuck right into the apex and keep going.”

Foust had Ford's fastest-ever small production car up to its maximum potential and came away impressed. He continues, “I was going into the exit corner at 110 mph and it’s just unbelievable that a small quick-turning car can be so good on a road course like the Nurburgring.”

The new Fiesta ST could be the best hot hatch in the world. In fact Tanner Foust was so impressed with the 2014 Ford Fiesta ST, he could only do one thing after his run on the Nurburgring, He took another lap in the fast performance oriented hot hatch.