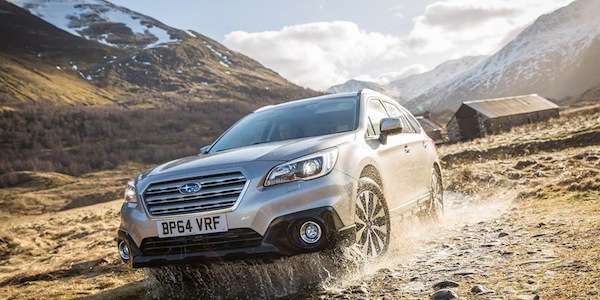 Subaru says they have a goal of being the number one brand for overall vehicle safety in the world. They have new technology called EyeSight that monitors your safety whether your eyes are on the road or not. Former Top Gear Stig Ben Collins, puts Subaru’s new 2015 Outback crossover through its paces, testing this new technology to see if actually works in the real world.

In the video below, the wind is howling at 120 mph, and this rear world conditions for testing Subaru’s pre-collision braking system. EyeSight is an option on this new 2015 Outback that Collins is driving and it features two stereo cameras mounted on either side of the rear-view mirror and monitors the road ahead. If an obstacle is detected, the driver is warned. The brakes are automatically applied if the warning is ignored, bringing the vehicle to a stop to avoid collision at speeds of up to 31 mph. The system reduces the speed of impact between 32 mph and 110 mph.

Check out the video below as Ben Collins drives the EyeSight equipped 2015 Subaru Outback toward another Outback stopped in the middle of the road.

How does the safety system work?

EyeSight’s safety technology in the 2015 Outback puts the driver at ease with more convenience and greater protection. The new-generation EyeSight system is effective in preventing vehicle mishaps and especially driver distracted errors. Subaru’s EyeSight is based on recognition abilities using a stereo camera system. The system processes the images gained from its stereo camera and recognizes the object before an accident occurs.

Subaru doesn’t seem to be satisfied with where they are at in the area of safety. Subaru has already stated they also want to...read more.

The emergency braking system on the 2015 Outback is particularly worthy of note. Instead of slamming the brakes on at the last second, Eyesight is already slowing the car the moment an obstacle is detected. This cannot only ease the impact, but it can stop the car before it hits the stopped car in front. Like Ben Collins found out, it's been engineered to apply the brakes, even if the driver does not.

Subaru reports 50 percent of EyeSight buyers have admitted that the safety system has prevented them from having a collision. Subaru’s accident rate for new registrations has halved since its arrival.

EyeSight will be an auto-industry game changer

In a recent article from Business Insider, they say that Subaru’s new EyeSight safety system will be an auto-industry game changer. They say this is due to the system moving from keeping occupants safe, to crash avoidance. In a real world test by Ben Collins, the EyeSight-equipped 2015 Subaru Outback shows just how well the safety system really works.

Tesla Contemplates A New Strategy for China Retail even As Sales Boom
Jay Leno on Elon Musk & EVs: “I Think He Should Get ... Credit"
END_OF_DOCUMENT_TOKEN_TO_BE_REPLACED