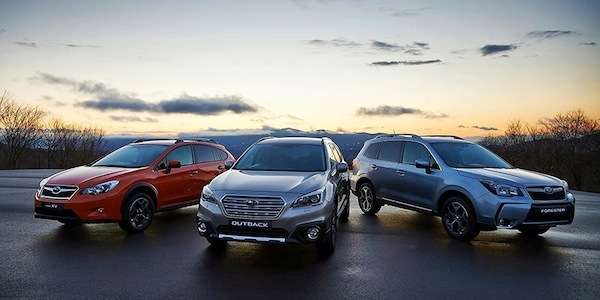 Subaru brought the EyeSight equipped 2015 Outback to Geneva. Subaru boss says they aim to be the number one brand for overall safety. How will the brand accomplish this?
Advertisement

The Geneva International Motor Show ended this past weekend and Subaru boss Nobuhiko Murakami made an interesting statement. Subaru brought a full compliment of their cars to the show, but they featured the new European spec 2015 Levorg and 2015 Subaru Outback wagon. When Nobuhiko Murakami, Corporate Senior Vice President Fuji Heavy Industries (FHI), unveiled the new European Levorg sports tourer last week, he made an interesting statement to the press. He said, “We aim to become the number-one brand for overall safety”.

Subaru is already the safety leader

Subaru has called themselves the safety leader for some time now so it’s not a big surprise the FHI Senior Vice President would make that statement. Here’s what is interesting about the statement. Subaru is leading the automotive world in safety already. Subaru is the only automaker in the world with the distinction of earning IIHS Top Safety Pick awards for every model it builds and has done so five consecutive years.

Subaru doesn’t seem to be satisfied with where they are at in the area of safety. Subaru has already stated they also want to keep the customers trust. They want to do this by continuing to build the safest vehicles on the planet. Subaru has been committed to safety and has developed its highly-rated collision safety and "EyeSight" driving assist system that is rated number one in the industry. Subaru’s goal is to “become a #1 brand for overall safety with "All-Around Safety" protecting all passengers and pedestrians.”

EyeSight will be an auto-industry game changer

In a recent article from Business Insider, they say that Subaru’s new EyeSight safety system will be an auto-industry game changer. They say this is due to the system moving from keeping occupants safe, to crash avoidance. Business Insider said, “That's big, and here's why: If enough automakers succeed at designing cars that can successfully, and autonomously, avoid a collision, accident rates will fall, and eventually so will insurance premiums.”

Subaru boss Nobuhiko Murakami knows Subaru is already leading in the area of safety, what he seems to be saying in Geneva is, the Japanese automaker isn’t going to stop with EyeSight. The new 2015 Subaru Outback unveiled in Geneva comes equipped with the new generation EyeSight. We can expect more new safety technology from Subaru in the future.

Check out the 2015 Subaru IIHS Crash Test with EyeSight video

John Goreham wrote on March 17, 2015 - 5:45pm Permalink
Seems to me it is arguably almost there now. All Subie needs to do is put Eyesight in every car it makes and it will be a slam dunk. By that I mean actually put the system in all the cars, not just make it available. I just had a test Outback (2015) without the system installed. Makes no sense to me.