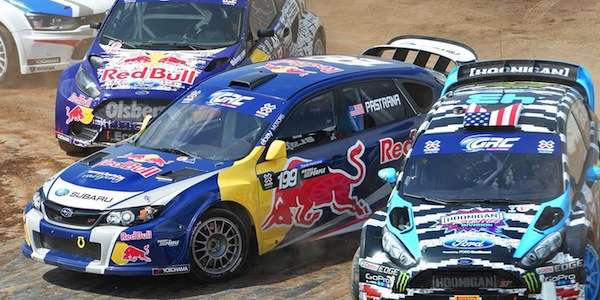 Volkswagen dominates the first day of Red Bull Global Rallycross at X Games. Subaru WRX STI is the only other car to break into a top spot.
Advertisement

Only Travis Pastrana of Subaru Rally Team USA was able to break VW’s stranglehold on the top spot with a win in Heat 1B. Yesterday’s Red Bull Global Rallycross at X Games Austin was dominated by the Volkswagen Andretti Rallycross and Marklund Motorsport teams.

Day one (Friday) of Red Bull Global Rallycross at X Games Austin was all about Volkswagen, as three of the four VWs in this weekend’s field earned heat victories on Friday morning. Only Travis Pastrana driving the Subaru WRX STI was able to break VW’s stranglehold on the top spot with a win in Heat 1B.

The Red Bull Global Rallycross action started yesterday with a new format for race fans. For the first time, a Red Bull GRC event at X Games will see multiple rounds of heats and multiple days of competition.

Here’s how it works at X Games Austin

Four heats of five cars each will take place over the course of three rounds, with Friday’s first round and Saturday’s second round (unlike the second and third round, as was the case in Barbados) awarding points to the drivers. Like Barbados, drivers will be assigned to new heat builds after each round based on their finishing position.

There will be six drivers in the final, while 7th-10th place points will be determined in the semifinals. Finishing order will depend on seeding before any of the heats took place. The higher seeded fourth place finisher in the semifinals will earn 20 points for seventh place, with the lower seed earning 15. Likewise, the higher seeded fifth place semifinal driver earns 10 points, while the lower seeded driver earns five.

The two sixth place finishers in the semifinals earn only a single point under the series’ new point system, as well as all drivers eliminated in the quarterfinals. Even though all of these drivers earn the same point total, official finishing positions will be assigned, based on quarterfinal finishing position and seeding result. It sounds a bit confusing because X Games Austin presents an altered format for Global Rallycross.

Volkswagen dominated the first day of Red Bull Global Rallycross at X Games Friday by winning three of the four top spots. Travis Pastrana driving the Subaru WRX STI is the only other car to break into a top spot. Tune in today to watch the Global Rallycross heat races that will air live on ESPN 12:00 to 2:00 p.m. ET, Then tune in to ABC from 2:00pm to 6:00 PM for the live Rallycross Final.