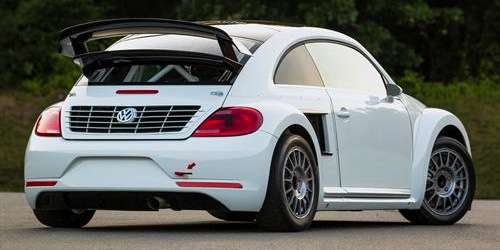 Speed and Foust have been driving the VW Polo’s and Speed has two victories already driving the No. 7 7 UP car. This car was specifically engineered by Volkswagen Motorsport for GRC competition. The picture above shows the new GRC Beetle without its GRC livery, but its a good bet the race car’s new paint job will look cool.

The new GRC Beetle is powered by a 1.6-liter four-cylinder TSI turbocharged and intercooled engine making 544 horsepower. It was designed and engineered from the outset as a GRC car, and features a sequential six-speed transmission, with a fixed-ratio all-wheel-drive system that features multiplate limited-slip differentials at the front and rear.

To be able to handle the tough off-road portion of the rallycross course, Volkswagen says the GRC Beetle uses an all-around strut-type suspension, with ZF dampers and about 9.1 inches of travel. The race car has 14.0-inch diameter front and 11.8-inch rear vented disc brakes, with four-piston aluminum calipers. The 17-inch wheels are shod with 240/640-R17 Yokohama competition tires.

The GRC Beetle comes with a large rear wing, widebody fenders, and aggressive front fascia. Overall, the car is 168.8 inches long and 71.7 inches wide, and has to weigh in at a minimum of 2668 pounds, per series regulations. VW says the new GRC Beetle will sprint from 0 to 60 mph in an incredibly quick 2.1 seconds making the new VW Beetle one of the quickest GRC cars in the series.

Scott Speed says, “The Polo has already proved super-competitive, and we are really looking forward to racing a car that has been engineered specifically by Volkswagen Motorsport for GRC competition.” Foust added, “I know I can’t wait to race the No. 34 Rockstar Energy Drink Beetle. There’s no cooler looking car in the series.”

The Volkswagen Andretti Rallycross team has been the team to beat, and it looks like Speed and Foust are about to get even more competitive with the new 2015 GRC Volkswagen Beetle Red Bull Global Rallycross cars. Next up, GRC travels to Washington, D.C. this weekend, June 22. Stay tuned to Torque News for the latest race results.