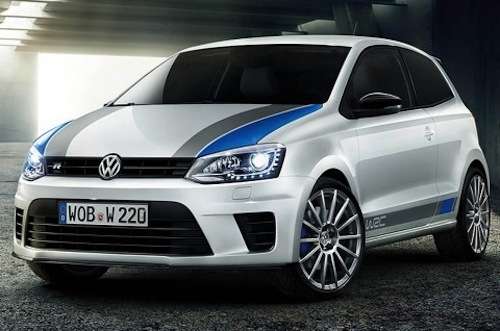 Volkswagen has revealed the 2014 Polo R WRC, the fastest production Polo ever at a press conference in Monte Carlo.
Advertisement

Just when you think you’ve seen it all, Volkswagen pulls out all the stops and has revealed the production of a new 2014 Polo R WRC that has enough horsepower to motor a vehicle twice its size. The new hot hatch unleashes 315 horsepower, and goes from 0-62 in 4.1 seconds. The Polo R WRC was just revealed at the press conference in Monte Carlo. The R represents Volkswagens performance models and WRC pays tribute to Volkswagen’s entry into the 2013 World Rally Championship.

The new Polo R WRC represents the ultimate performance in the compact hatch segment. The performance of the new sporty compact should surpass that of its hot supermini rivals, such as the upcoming 2014 Ford Fiesta ST. The high-performance, front-drive hatch is very similar to the Polo WRC Street concept revealed at the GTI Treffen event held in Worthersee, Austria last May.

The most powerful Polo ever produced

The 2014 Polo R WRC is based on the fifth-generation Polo platform, and features a turbocharged 2.0 TSI four-cylinder engine found in the Golf GTI. The powerplant produces 315 hp and 258 lb ft of torque and is the most powerful Polo ever produced. The 2.0-liter powerplant is mated to a short-shift six-speed manual gearbox that transfers power to the front wheels. The three-door Polo is fitted with 16-inch disc brakes for stopping power.

The new hatch is lightweight with a curb weight of 2919 lbs and is made of some “rally-inspired lightweight materials.” The car has a top speed of 151 mph and will excite even the most adventurous performance enthusiasts. Volkswagen says, “We supply it in Pure White, It’s up to you to add the special mud color.”

The new hot Polo features exterior goodies like 18-inch alloy wheels, bi-xenon headlights, and rally paint finish. It also comes with a rally-inspired lower front spoiler with large air inlets, a spoiler on the rear edge of the roof and a rear diffuser. The exterior also gets ‘WRC’ badging on the rear and ‘R’ logos front and rear, while the white and blue/grey livery ties in with the Polo WRC competition car.

Inside it comes with WRC-badged sport seats to keep the driver firmly planted in the corners. It also features an Alcantara steering wheel, black roof liner and racing-style pedals. Only 2500 examples of the Polo R WRC will be built, and the car will only be available in Europe.

Advance orders will start this month, with deliveries scheduled to start in September 2013. The car will cost $43,819 U.S., but don’t expect to see it on U.S. shores. But we still can’t wait to see the 315 horsepower 2014 Volkswagen Polo R WRC let loose!