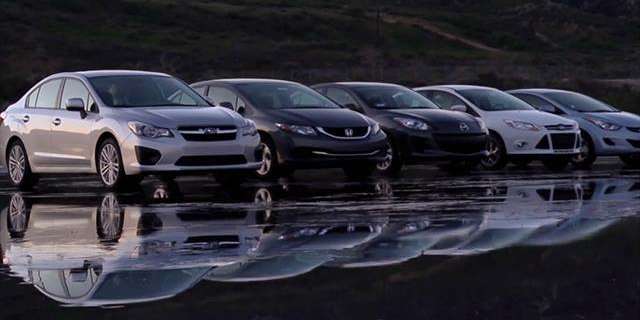 The United States Auto Club (USAC) could have saved a lot of time and money testing the 2014 Subaru Impreza against the most popular front-wheel-drive cars. USAC says they conducted a wet pavement test to show the differences between AWD and 2WD on wet or slippery surfaces. The popular auto club conducted an independent wet pavement test of the Hyundai Elantra, Honda Civic, Ford Focus, Mazda 3 and 2014 Subaru Impreza.

But did they really need to conduct this test to know how much difference there is between the two different drive configurations? Wouldn’t most drivers already know that an all-wheel-drive car will significantly outperform a front-drive car in wet or slippery road conditions? Maybe USAC had extra time and money to spend before the end of the year.

So they set up two separate tests and ran all five of the popular small sedans through the wet pavement tests. It’s really no contest, but I guess it does show how much better an AWD car performs in adverse conditions. They say the other popular small sedans are in the same class as the Subaru Impreza. But the only thing similar, is the size and price range of these sedans.

They sprayed down a polished concrete surface with water that had a coefficient of friction of 0.3. Now I’m no scientist, but a quick reference from Universe Today, shows that the coefficient of friction (COH) is “the value which describes the ratio of the force of friction between two bodies and the force pressing them together.” They range from near zero to greater than one, depending on the types of materials used. For example, ice on steel has a low coefficient of friction, while rubber on dry pavement (i.e. car tires on the road) has a comparatively high one.

Having a COH of 0.3 shows the water-soaked polished concrete surface was very slick. Test number one was designed to measure controlled acceleration on the wet surface. Each vehicle demonstrated how well they would be able to accelerate on the wet surface from a complete stop. In the Wet Surface 40-foot test, the Subaru Impreza of course finished first followed by the Ford Focus, Hyundai Elantra, Mazda3 and last, the Honda Civic.