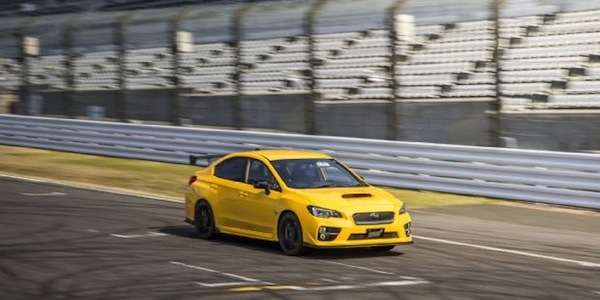 STI is testing a new Subaru WRX STI prototype at Suzuka Circuit in Japan. What does this mean for U.S. buyers?
Advertisement

Subaru Tecnica International (STI) is always secretive about any new projects they are working on and this Subaru WRX STI prototype is no different. Automobile Magazine has reported that they have seen and driven this new STI prototype and the new WRX STI is one sick ride. Automobile reports that this yellow STI will be produced by Subaru in the future.

STI launched in 1988 to manage Subaru’s motorsports activities, and now they also produce complete vehicles for the Japanese automaker. STI is Subaru’s performance division and will be bringing complete vehicles to the U.S. as they expand their performance prowess in North America. It’s doubtful Subaru will launch this special WRX STI in the U.S. and it will likely be a Japan domestic market vehicle or a special edition model.

STI’s future activities in the their largest market, the U.S., will include expansion of the STI-brand aftermarket parts as well as introduction of complete STI-tuned cars like the...read more.

Here’s what we know about this new WRX STI prototype. Automobile reports that is comes with Brembo brakes with six-puck calipers up front, plus a cat-back exhaust system. This special STI is powered by a 2.0-liter turbo boxer engine that’s the same powerplant as the model sold in Japan. The current production 2.0-liter WRX STI sold in Japan produces 304hp and 311 lb ft of torque.

STI told Automobile, the 2.0-liter boxer in this STI prototype has been upgraded with blueprinted internals, a set of carefully weighed and balanced pistons, and a larger capacity ball-bearing turbocharger. STI says it pumps out well over 300 horsepower. This is the same 2.0-liter direct injection turbo "DIT" boxer engine Subaru runs in the U.S. spec WRX, but with a lot more performance upgrades.

STI perfects the 2.0-liter at Nurburgring

STI has tested this engine under the most severe race conditions at the Nurburgring 24-hour race and it’s proven to be a great engine. Many believe it’s a better engine than the production 2.5-liter the new STI comes with in all other global models. Japan’s current 2015 WRX STI 2.0-liter boxer uses a combination of direct injection, high compression (10.6:1), Subaru Dual Active Valve Control System (D-AVCS), a twin-scroll turbocharger and an intercooler to get improved performance. The WRX STI Nurburgring race version uses different cams and higher-rate valve springs and other enhancements to enhance the performance envelope.

Automobile drove the new WRX STI yellow prototype and says it handles like a “full fledged racing car.” They also said, “During our laps on the Suzuka F1 circuit, we pushed the production WRX STI as hard as we could, and the car drifted sideways in every corner, its clever differentials helping to keep us out of the weeds. But in the prototype, we can't push hard enough to make the car do anything wacky. Damned if we're not trying, but the STI prototype is plastered to the track.”

Is STI testing this new Subaru WRX STI to compete with the new Ford Focus RS that will hit U.S. shores next year? This STI prototype could end up being a Japan-only special edition model. Subaru clearly has something new planned for the WRX STI. Stay tuned.

Jacques Steennot wrote on April 13, 2015 - 9:42am Permalink
I'm sure there's also demand for this powertrain in Europe. Will this new engine comply with Euro 6 standards?
Alex wrote on April 15, 2015 - 12:41am Permalink
im sure this FA will, it burn less fuel than the EJ currently sold there.
eddie wrote on July 16, 2015 - 9:18am Permalink
This article is a mess. Japan WRX STI is still using EJ20 engine. The car that they use on 24hour Nurburgring is also using EJ20.
Stephen wrote on April 10, 2016 - 12:22pm Permalink
So true. Trying to get people to wait for the FA20 when really, they're running an engine with much better internals.