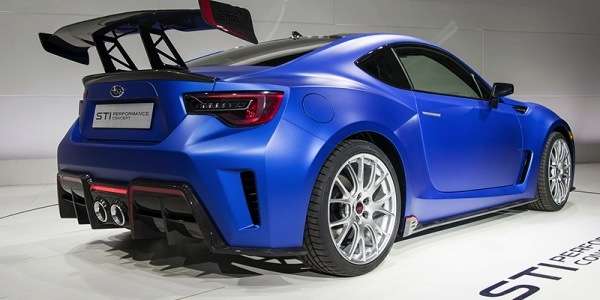 Subaru fans have a lot to be excited about after the Japanese automaker revealed the new BRZ STI Concept at NYIAS. What’s next for Subaru?
Advertisement

Performance fans and motorsports fans have much to be excited about after Subaru unveiled the fire-breathing 450hp BRZ STI Concept at NYIAS yesterday. This car will not likely reach production anytime soon, but it points to more Subaru STI vehicles in the future. It goes far beyond Subaru producing a turbocharged BRZ production model. What’s next for Subaru?

Fuji Heavy Industries Ltd. (FHI), the manufacturer of Subaru automobiles, unveiled the “STI Performance Concept” at the 2015 New York International Auto Show and announced Subaru Tecnica International Inc. (STI) will expand its influence in the U.S. market. As reported by Top Gear, this BRZ STI pumps out 450bhp even though Subaru officially quotes power at 345bhp and 332 lb ft of torque.

Dominik Infante, National Manager, Product Communications for Subaru told TG.com the concept car actually produces closer to 450bhp. "They quote it lower on the stand, but that's just an agreement between the Japanese manufacturers. In the race series they downgrade their power, but in reality, in this concept car, that engine makes 450hp." He also told TG that in the U.S., people really don’t know who STI is, and said, “We suspect after this (NYIAS), they just might.”

In the U.S., fans know STI because of the WRX STI performance cars. STI has a long and storied history in their motorsports activities. STI was established to undertake the motorsport activities of Subaru back in 1988. Today, STI’s core business is supplying motorsport base vehicles and competition parts and planning and developing Subaru limited edition models. They develop the performance knowledge through their motorsport vehicles, and then apply special tuning techniques as well as planning and selling accessories and tuning parts to Subaru vehicles for performance fans around the globe.

What can performance fans in the U.S. expect?

Subaru says STI will expand their presence in the U.S. in three key areas. STI’s future activities in the their largest market, the U.S., will include expansion of the STI-brand aftermarket parts as well as introduction of complete STI-tuned cars like the BRZ tS and Forester tS Japan models that haven’t been offered in the U.S. In the motorsports area, STI will increase its engineering presence in SRT USA’s GRC team that runs the new 2015 Subaru WRX STI in the Red Bull Global Rallycross Championship.

STI’s presence is already being reported in the new STI GRC race car. SRT USA says the new 2015 STI will launch from 0-60 in a lighting quick 2 seconds. Bucky Lasek and Sverre Isachsen should be ready to challenge Joni Wiman, Ken Block, Scott Speed and Nelson Piquet JR. for the title this season.

Subaru performance and motorsport fans have a lot to be excited about after the Japanese automaker revealed the new BRZ STI Concept at NYIAS. Stay tuned for more podiums for SRT USA and new Subaru STI vehicles in the future.