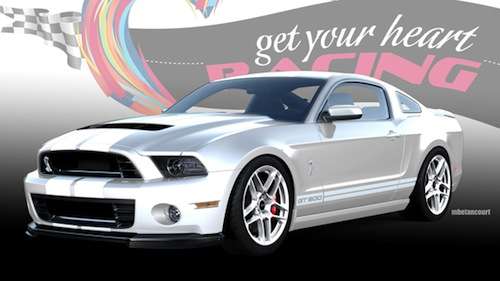 A very special one-of-a-kind 2013 Ford Shelby GT500 will be auctioned off this Saturday to benefit the Henry Ford Health System.
Advertisement

Betancourt credits the HFHS with saving his life when he was treated for a serious heart condition. The Ford designer was given the ok by Ford Motor Company to design a unique one-off 2013 Ford shelby GT500 for the auction. Betancourt focused all of his talents and skills on creating this very special edition sports car.

The incredible Shelby GT500 was specially designed for the 2012 “Get Your Heart Racing” event and charity auction this Saturday. The 45th anniversary of the legendary Shelby GT500 is being celebrated by Ford this year and the Shelby Team created an extraordinary car to mark the special occasion. The supercar is the most powerful production Mustang ever produced. It sports an incredible factory 662 horsepower and 631 lb.-ft. of torque and a top speed of more than 200 mph.

The one-off 2013 Shelby GT500 created by Betancourt keeps the original factory equipped powertrain and adds a unique appearance. For Henry Ford Health System, he created a car with a unique white exterior paint and contrasting white graphics. It transfers all the power to the ground via twenty-inch white wheels that add to a look that “is nothing short of breathtaking.”

Inside, the racing-inspired interior gets special white leather Recaro seats stitched with a black contrast thread to compliment the exterior color scheme. This special-edition 2013 Shelby GT500 will certainly satisfy the most enthusiastic performance enthusiast and he or she will have a one-of-a kind investment that would surely grow in value.

“Even with his rich racing pedigree, it’s hard to imagine what Henry Ford might have thought had he ever encountered such a massively powerful vehicle as the 2013 Shelby GT500,” said John Felice, general manager for Ford and Lincoln Marketing. “However, we’re fairly certain he’d be thrilled the car carries the Ford oval, and that this unique edition is being auctioned to support the critically important work of saving lives.”

To learn more about the important work done at the Henry Ford Health System, click here. To read more about the 2013 Ford Shelby GT500 click on the articles below.