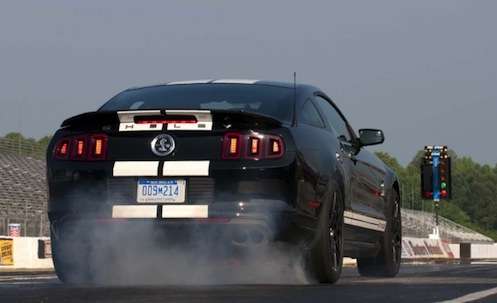 The SVT Team takes the 2013 Ford Shelby GT500 out to the drag strip at Speedworld to test it on the 1/4 mile track.
Advertisement

The SVT team took the 2013 Ford Shelby GT500 out to Speedworld, a 1/4 mile drag strip which is near the companies proving grounds in Arizona, to test the supercars capabilities going in a straight line. The Shelby GT500 is probably the most tested car to ever come out of Ford because the Shelby and SVT name were on the line. And because this car has more power than any production V8 in America, they needed to know that everything was going to work properly before the car began mass production.

The 2013 Ford Shelby GT500 produces a massive 662 horsepower and 631 lb. ft. of torque from the 5.8-liter supercharged V8, and the SVT engineers had a monumental task to make sure the new launch control system was working properly. They needed to know that anyone could get into the new 2013 Shelby GT500 and make the new system work. While seasoned drag strip veterans know how to launch that much horsepower off the line, the SVT Team knew that most drivers that got behind the wheel of the supercar would be weekend warriors and need help.

The Shelby GT500 needs to be safe for everyone

The launch control on the Shelby GT500 is designed for someone who is not doing it everyday and wants to take his new car out the drag strip to impress his friends. This system would never be used on the street, as you would probably not only lose your license, but endanger the lives of people around you. The SVT Team wanted the average guy to be able to take his shiny new Shelby GT500 to the track and have fun in a safe environment. It gives someone who is not a professional driver the ability to be more consistent than if they had to control the rpm launch with their foot and then do everything else on their own.

Because the 2013 Shelby GT500 has so much horsepower and torque, the SVT Team had a big challenge to make sure the supercar has the right amount of balance and traction for varying conditions on the drag strip. So one month out from the car going into high volume mass production, the SVT had a final opportunity to see if everything on the ultra-performance car was functioning properly together.

They were able to test the supercar trying different launch speeds to see how the car performed. John Pfeiffer, SVT Vehicle Engineer, said, “we like to do our drag starts with various conditions and here at the drag strip it’s high grip conditions.”

The Shelby GT500 gets a final test before production

The drag strip is a very unique environment for any car, but the 2013 Shelby GT500 is no ordinary car and is designed to go fast in a straight line, especially on the drag strip. The SVT Team smokes the tires and gets the tires nice and sticky for the test runs. So how fast did the new Shelby GT500 do in the 1/4 mile runs? The Ford SVT Team lists their best 1/4 mile time of 11.82 seconds and a trap speed of more than 125 mph.

Other independent tests have shown that the 662 horsepower car will produce quicker 1/4 mile times, but the SVT Team wasn’t looking for the fastest time. They were there to make sure the 2013 Ford Shelby GT500 was ready for mass production. One SVT engineer said, “it was an absolute balls-out challenge for us to try to do it..and we did it.”

Watch the 2013 Ford Shelby GT500 in action at the drag strip in the video below.

Anonymous wrote on July 5, 2012 - 3:27pm Permalink
to bad all that testing was a waste of time & money for ford seeing how the zl1 camaro is slower but automaticly wins because of a nice smooth ride and the fact everyone needs gm stock to go up so the taxpayers dont get burnt so bad when the gov sells all their gm stock.
wilhelm wrote on July 7, 2012 - 7:32pm Permalink
That makes absolutely no sense. try again.
Anonymous wrote on July 8, 2012 - 5:50pm Permalink
You must be kinda....special.