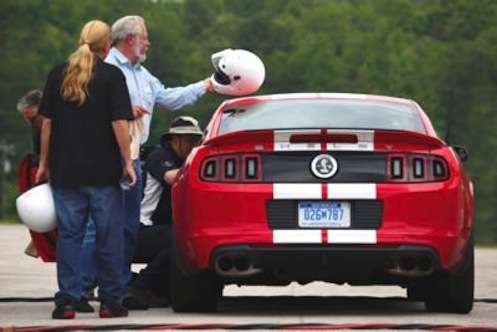 Go behind the scenes and meet the Ford SVT team who are the faces of the 2013 Ford Shelby GT500.
Advertisement

Chrysler has a SRT division, GM has a Performance Division, and Ford has the exclusive Special Vehicle Team (SVT). These are the jobs that those who love high-performance vehicles dream about having. The SVT team spent long hours working on the 2013 Ford Shelby GT500, put they have a passion for what they do.

The SVT team was developed by the best and brightest within the Ford Company back in 1993. The elite group of engineers and planners is an in-house performance arm within the Ford Company that create low-volume vehicles for those that want something very special. SVT vehicles are for car and truck enthusiasts who want more than just transportation to and from work.

The SVT team has a clear mission

One press release stated that SVT's mission was "to use the best-available resources from both inside and outside Ford to explore new ways of creating and marketing high-performance vehicles. The cross-functional team is charged with delivering limited-edition, high-performance derivative cars and trucks designed to delight serious drivers.... SVT's refined, understated 'form follows function' philosophy reflects our passion for multi-dimensional performance."

When you look at the 2013 Ford Shelby GT500, it might be easy to think that the car is just another car mass produced on an assembly line. But the supercar was built by a small group of hard working people who have spent long days ensuring that the finished product is as good as it can possibly be. And this team of lucky engineers is a very special group.

And it starts at the top with the teams inspirational leader, Carroll Shelby who was with every part of the process from start to finish. And the rest of the team is quite impressive. Gene Martindale is the Lead Development Engineer who understands that you can’t just look at raw numbers, you have to take the car out on the track to experience real-world performance testing.

Eric Zinkosky is the Vehicle Dynamics Supervisor who said, “it takes a total team effort to develop and make the 2013 Shelby GT500 the best possible vehicle we could.” The team also consists of a suspension group, an engine group, drivetrain group, and a body aerodynamics group. Vince La Violette who is the Shelby Senior Designer, is proud that the team has built the fastest most capable Mustang that Ford has ever produced.

The 662 horsepower that the 5.8-liter V-8 pumps out, and the 200 mph plus track speed is just part of the story. The SVT team has truly put together a masterpiece in engine, suspension, aerodynamics, and sheer driving excitement with the 2013 Ford Shelby GT500.

Take a look at the video below and go behind the scenes and hear many from the SVT team talk about the supercar. The team was at Sebring International Raceway back in October for a week-long track test of the 2013 Ford Shelby GT500.