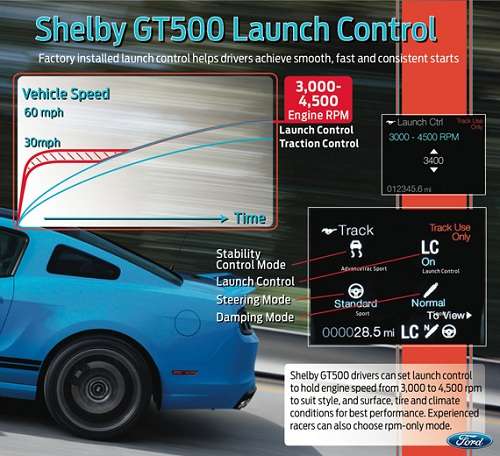 The 2013 Ford Shelby GT500 will be the first in history to have launch control.
Advertisement

Imagine yourself the pilot of a 2013 Shelby GT500, Ford’s most powerful Mustang in history. As you pull up to a stop light there is a Porsche 911 Carrera 4 next to you. The driver (wearing a pink golf shirt) takes one look at you and your ‘stang and then stiffens up and stares at the light. Time to show the country club poser what American muscle can do. However, as the light turns green the all-wheel-drive Carrera r squats slightly and without any sound from the tires is gone. Meanwhile your GT500 is smoking the rear tires and slowly drifting sideways into the curb.

In order to prevent this kind of performance anxiety Ford has wisely added the magic of Launch Control on the GT500.

As we Spider Man fans all know, with great power comes great responsibility. Having 662 horsepower under foot and enough torque to temporarily slow the Earth’s rotation (or speed it up depending upon if the car is pointed East or West) is a recipe for disaster if a driver rich in dollars, but poor in common sense tries to apply that power in the wrong situation.

With a convertible GT500 on the way, the responsibility Ford has to keep the shiny side up on these cars despite the driver’s bad habits is great. These monster pony cars are capable of sub 4 second 0-60 times and quarter miles under 12 seconds. However, if the car cannot put the power down it is all for not.

2013 Ford GT500 Launch Control Sequence
Ford realizes this and has introduced launch control on the 2013 GT500, even though it does have a bit of a negative ring to the ears of muscle car fanatics. Here is how it works: The driver first either taps a switch on the left side of the instrument panel, or enables launch control via the infotainment system. Then the driver simple guns the throttle and lifts off the clutch quickly. The car will automatically manage engine speed and also apply the rear brakes to control single tire spin and enable the car to get a fast launch.

The really cool part is that the system can be tweaked by the driver for drag strip applications. The engine RPM can be bumped up or down in 100 RPM increments to allow the driver to dial in the perfect amount of wheel-spin. To use a technical term this is “way more cooler” than the first launch control systems that appeared on cars. Some required multiple weird steps and spoken incantations to enable the launch control to take over.

Improved Track Times
Ford is wisely marketing this as a speed enhancement system. Eddie Khan, SVT Engineering supervisor puts it this way ina press statement. “We recognize not every driver has the same style, and surface, tire and climate conditions vary. Most of our competitors’ launch control systems have a fixed engine launch speed. We've given Shelby GT500 drivers the ability to adjust the engine speed to achieve best and most consistent performance, no matter where and when they drive.” In other words it will help you decrease your track speeds and you have some control over the system. John Pfeiffer, senior engineer, SVT Vehicle Engineering says it more bluntly. “With so much more power and torque on tap from the new 5.8-liter V8, launch control makes it easier for drivers to take advantage of the performance.”

The 2013 Ford GT500 will benefit from traction control and avoid embarrassing premature wheel spin we all sometimes experience.

Alberto wrote on May 16, 2012 - 10:37am Permalink
Hey chevy, there is replacement for displacement, its called "engineering" and Ford does it pretty well, you should look into that.