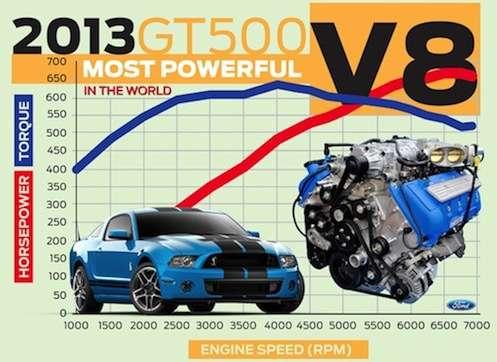 With 662 horsepower, the 2013 Ford Shelby GT500 is the world’s most powerful series production V-8, and is the most fuel-efficient car in its segment.
Advertisement

When Ford revealed that the 2013 Ford Shelby GT500 was officially certified at 662 horsepower and 631 lb-ft. of torque, GT500 fans got excited that the all-new supercharged V-8 was the most powerful production V-8 car in the world. It beat its two biggest rivals, the 2012 Chevrolet Corvette ZR1 by 24 horsepower, and the 2012 Camaro ZL1 by 82 hp.

Now Ford Shelby GT500 fans have something else to cheer about. In a press release on Wednesday, Ford revealed that even though the 2013 GT500 has 112 more horsepower than the 2012 model, fuel economy has increased in the new muscle car by 1 mpg in both city and highway numbers. Ford says the new 2013 GT500 is the most fuel-efficient car in the segment in cars developing over 550 horsepower.

The 2013 Shelby GT500 gets an EPA-estimated 15 mpg city, 24 mpg highway and 18 mpg combined with no gas guzzler tax. Even with an extra 82 horsepower and 75 lb.-ft. being generated under the hood, that’s 5 mpg better on the highway than the 2012 Chevrolet Camaro ZL1.

Given the huge bump in horsepower from the previous model, the 1 mpg seems like quite a significant achievement for Ford engineers. So how did they achieve the increase without changing the gearing and sacrificing performance on the low end? Ford engineers redesigned the 5.8-liter V-8 to generate 395 lb.-ft. of torque at 1,000 rpm right off of idle. And most of the torque kicks in from 2,200 to 5,800 rpm to allow the GT500 massive acceleration off the line.

Ford didn’t stop with massive engine performance, but also made tuning changes to the chassis, and revised the front fascia and splitter to help manage the flow of air around and under the GT500. The updates make the 2013 model more aerodynamic and 33 percent more efficient at 160 mph compared to the outgoing 2011 model.

With all that power, it's no fun if you can’t control the vehicle at high speeds. Ford also gave the new Shelby advanced driver-adjustable electronic assist features including launch control, Bilstein adjustable damping, AdvanceTrac stability control and electric power-assisted steering.

It looks like Ford engineers certainly did their homework and made the world’s most powerful production V-8, not just powerful, but with the new chassis updates, brakes, and aerodynamic features, they've made the 2013 GT500 an outstanding all-around sports car.

Anonymous wrote on June 16, 2012 - 6:03pm Permalink
Did they also give it independent rear suspension? Or is it still an livea rear axle?

LG's New EV Battery Plant Is a Welcome News for Tesla
Tesla Giga Berlin's New Hurdle: It's Not Only the Gov't, but Now Tesla Itself
END_OF_DOCUMENT_TOKEN_TO_BE_REPLACED