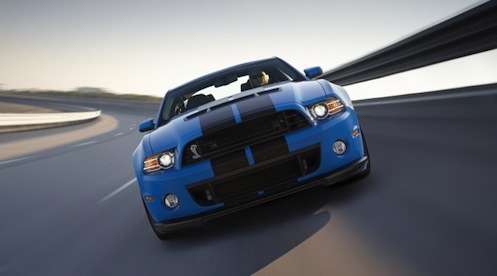 The 2013 Shelby GT500 was caught testing at the famed Nurburgring and gets captured on video.
Advertisement

The guys at High Gear Media, were in Nurburg Germany recently and ventured over to the motorsports complex that made the small village famous. While they were at the Nurburgring race track, they spotted a 2013 Shelby GT500 getting ready to launch onto the track for a test run. They grabbed their video camera and shot some spy video of the all-new Shelby.

Because the track is located in the Eifel mountains, weather can change quickly and rain is a common occurrence. Unfortunately, rain hit the 'Ring first, before the Shelby GT500 took to the track. But there was still some excitement as the 662 horsepower snake made some impressive runs around the famed track. Later on, the sun peaked out and the blue and white Shelby GT500 was able to make some spirited runs.

As we reported here, Ford has revealed that the 2013 Shelby GT500 was certified at 662 horsepower and 631 lb-ft. of torque. That puts the new GT500 in rarified air as that’s 24 more horsepower than the Chevrolet Corvette ZR1 and 82 more hp than its rival Camaro ZL1. Ford originally said the 2013 Shelby GT500 would have an incredible 650 horsepower which made it the more powerful than any production V-8 car in the world.

But the all-new Shelby GT500 delivers more than just raw horsepower. The folks over at Shelby have designed a muscle car that is lightweight and is more aerodynamic than ever before. The GT500 only weights 3,850 lbs. and the car will do in excess of 200 mph. Everything on the new Shelby has been upgraded, from the powertrain, the gearing and suspension, and even the Brembo brakes which feature six-piston caliper units up front and more aggressive pads on all four corners.

To take this machine out on the Nurburgring had to be a fun experience for the two who were caught on the video clip. After they finished the fastest lap of the day, they took the car out on the streets on Nuburg and cruise through the small village before disappearing into a building not to be seen again that day.

Embedding of the video has been disabled, so follow this You Tube link to see the Shelby GT500 take on the Nurburgring.

Fenderaddict2 wrote on May 7, 2012 - 11:49pm Permalink
This is not a Shelby American product but a product of the Soecial Vehicle Team within Ford. It is a Shelby in name. You can however order even more extreme Shelby's such as the GT1000 that are not Ford in-house builds.
Anonymous wrote on May 12, 2012 - 6:33am Permalink
SVT -> Special Vehicle Team! And it's not entirely correct because those Shelbys were developed by SVT supported by Shelby. So, yes, you're right, the car is built by Ford and is therefore a true Ford Mustang but it's a bit more than just the name...

LG's New EV Battery Plant Is a Welcome News for Tesla
Tesla Giga Berlin's New Hurdle: It's Not Only the Gov't, but Now Tesla Itself
END_OF_DOCUMENT_TOKEN_TO_BE_REPLACED