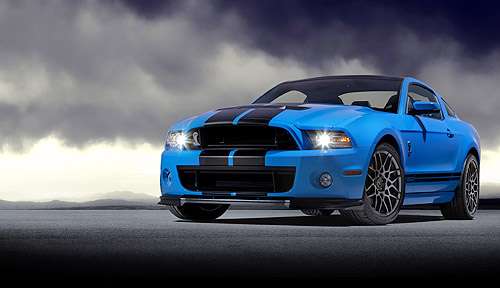 2013 Shelby GT500 Convertible a Mistake with All That Power

The web is alive with the rumor that Ford is going to introduce a 2013 Shelby GT500 convertible at the Detroit Auto Show - and from this viewpoint it's a horrible idea. In what world does a driver need a 650 horsepower V8 with a soft-top convertible? It's got death trap written all over it.
Advertisement

As I reported back in November here on TorqueNews, the 2013 Shelby GT500's 5.8-liter V8 aluminum-block engine produces 650 horsepower and 600 lb. ft. of torque. Nearly every part of the powertrain has been optimized for producing the additional horsepower, including a new supercharger, new cross-drilled block and heads, updated camshaft profiles, a new carbon fiber driveshaft and upgraded clutch, transmission and axle.

In simpler terms, the 2013 Shelby GT500, see picture accompanying this article, is built for speed. Why put a convertible top on it? Where does the silly horsepower race among high-performance convertibles come to an end? This car, when 0-60 times are announced, should be able to hit that mark probably below the 4.0 second mark. That's great for a racecar but a convertible?

The problem is the car companies are playing the locker room game of "Mine's bigger." It's a race between Camaro and Mustang to see who has phallic domination. The Camaro ZL1 has a supercharged 6.2-liter engine that is SAE-rated at 580 horsepower and 556 lb.-ft. of torque – making it the most-powerful production Camaro ever and it's going to be available in a convertible.

Somehow the Japanese have avoided the soft-top performance competition and so have the Koreans, which just seem to abhor the idea of convertibles in general. Asian manufacturers have a reputation for long-term planning. They must know there is no sane reason for high-performance convertibles and I applaud them for that.

This isn't some rant against high performance – far from it. I love taking my largely inadequate skills and flogging them around a racetrack. A recent week behind the wheel of a 2012 Ford Boss 302 Mustang left me lusting for more. High-performance machines are a great idea but high-performance soft-stop convertibles are well, frankly, stupid.

The 2011 Ford Mustang GT has a 5.0-liter 32-valve DOHC V-8 that delivers 412 horsepower and 390 ft.-lb. of torque. What more do you need in a convertible? Really? Aren't convertibles supposed to be about cruising? The 0-60 time for the GT500 without the Shelby add-on has been rated around 4.5 seconds and 4.6 seconds for the convertible. Those are great numbers.

Where does it all end? Ultimately it has to end in some idiot's death. In spite of all the safety features like electronic stability control, roll bars, and a plethora of airbags, 650 horsepower in a soft-top convertible is just too much power. As Porsche likes to point out, you can't overcome the laws of physics.

Yes, Porsche produces the 911 Carrera S cabriolet can reach 60 mph in as little as 4.1 seconds and has a top-track-speed of 187 mph. I'd consider it culpable but its the Carrera S comes with a 3.8- liter boxer six-cylinder DFI engine developing 400 horsepower.

This horsepower arms race among convertibles has to stop. OEMs need to demonstrate some self-control. Sometimes the customer isn't always right. This is one of those times. By the way, I know some people are going to consider my views idiotic. Convince me I'm wrong.