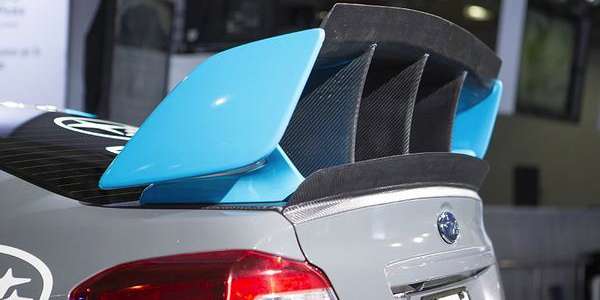 The all-new 2015 Subaru WRX STI has been transformed into full Global RallyCross trim and may have two new drivers when it hits the track.
Advertisement

The all-new 2015 Subaru RallyCross STI has broken cover and is ready to compete in the 2014 Global RallyCross Championship. But Subaru says they may add two new drivers to the 2015 RallyCross STI later this season. David Higgins and Travis Pastrana, who compete in the Rally America Championship for Subaru Rally Team USA, may contend select RedBull GRC rounds for Subaru as well. They will add to last years team of Bucky Lasek and Sverre Isachsen.

Lasek and Isachsen will begin the RedBull GRC season in the 2014 WRX STI, and the two drivers will be transitioning to the 2015 WRX STI in later GRC races this fall. Now it looks like David Higgins and Travis Pastrana will also be joining the Global RallyCross team later in the season in the 2015 RallyCross STI when it’s ready. We had a good idea that Travis Pastrana was going to run for Subaru in the GRC, but David Higgins being added is a complete surprise.

Vermont SportsCar, who prepares Higgins Rally America and also the GRC cars, has been getting the 2015 WRX STI ready and started with a production model that was completely disassembled and transformed into the GRC RallyCross Supercar Trim that was unveiled at the New York International Auto Show. The 2015 Subaru RallyCross STI gets external upgrades over the production model like a custom widebody, an larger STI wing integrated with carbon fiber aerodynamic enhancements, and a classic rally car-style roof ventilation scoop.

The 2015 RallyCross STI is powered by a 600 horsepower turbocharged Subaru boxer engine coupled to a race-spec sequential gearbox with Subaru’s Symmetrical All-Wheel Drive sending power to all four wheels. The GRC RallyCross STI comes with an advanced rally-spec suspension that will handle the extreme conditions on the tracks. The car rides on Method Race Wheels, wrapped with new Yokohama GRC spec competition tires.

NBCSN will also air the Rally America Championship, which Subaru has won the title seven of the last eight years. “We are excited about the collaboration between RedBull GRC, team stakeholders and NBC Sports Group, and look forward to a successful season.” said Gary Quinn, Vice President, Programming and Owned Properties, NBC Sports Group.

We will look for the all-new 2015 Subaru WRX STI in RallyCross STI trim in action later this season. We’ll also look for David Higgins and Travis Pastrana to contend select RedBull Global RallyCross rounds for Subaru as well. Stay tuned to Torque News for the latest Subaru GRC news.