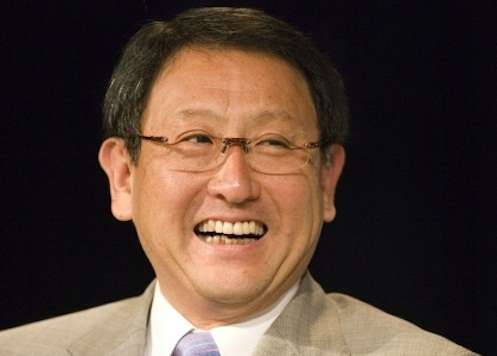 CEOs of automakers don’t usually comment on how much they like a vehicle from a competitor, but that’s what Toyota President Akio Toyoda did at his inauguration as Chairman of the Japan Automobile Manufacturer's Association.

Toyoda was quizzed on his preferences among his company's rivals, and the outspoken CEO who isn’t a conventional boss, wasn’t afraid to tell the group. Toyota President Akio Toyoda, great-grandson of the company's founder, is unusual in the very competitive automotive world. Toyoda isn’t your typical grey-suited CEO, as he grew up loving cars and is a certified test driver for Germany's famed Nurburgring, and regularly drives competitive vehicles.

Its been reported that he will frequently make highly technical suggestions about ride and handling of the cars his company produces. And not only does he like his own companies cars, he likes cars that other companies make, and he's happy to share his favorites with us.

At the Japan Automobile Manufacturers Association, Toyoda was quizzed on his preferences among his company's rivals. Toyoda singled out one model from each of the other member automakers. The list is interesting and says a great deal about Toyoda’s taste in vehicles and his knowledge about his competitors.

From Mitsubishi, Toyoda skipped over the brand's numerous sports models, singling out the Pajero as his favorite. The Pajero SUV was the first real domestic rival to the Land Cruiser.

From Mazda, Toyoda's favorite is the 1967 Cosmo Sport Roadster, the first rotary-powered car from the Japanese carmaker. The Alfa-inspired styling and unique engine made the car an instant classic. It also competed in the 84-hour Marathon de la Route, held at the Nurburgring in 1968.

Isuzu, a passenger car brand here in the U.S., the 1963 Bellett was Toyoda’s favorite. The little Bellett was a huge success in Japan, and the first Holden Gemini was an Isuzu.

It’s no surprise Toyoda’s favorite Honda is the Honda NSX. The low-slung coupe changed the supercar market forever by offering not only a sporty fast car, but by introducing reliability and comfort to go along with it.

From Nissan, Toyoda chose the early Nissan Skyline which spawned the GT-R performance model that was a huge success on the road and on the track, and a rival to Toyota's retired Supra line.

Despite taking over the reins less than three years ago, Toyota’s CEO Akio Toyoda seemed to ascend to leadership on the basis of blood rather than his abilities to lead. But Toyoda, has already infused his car company with a new spirit after the multiple recalls and the devastation from the disastrous earthquake and tsunami. Under his guidance, he has taken a hands-on role in developing new edgier models. Toyoda is the force behind Toyota's new driver focus. The new Toyota GT 86, Scion FR-S and the Lexus LFA are part of his vision to improve Toyota's image.