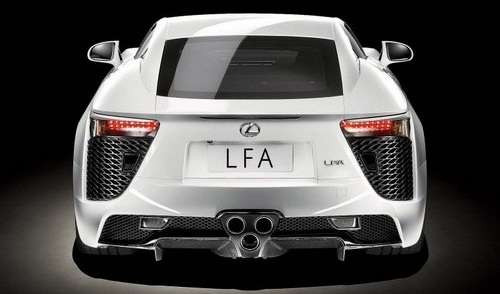 Are plans for a new Lexus supercar in the works?

An anonymous source within Lexus, says plans for a one million dollar supercar are on the drawing board.
Advertisement

For a brand that has built its reputation on smooth, refined and perfectly-calming automobiles, Lexus has taken a strange turn into the world of exotic, fast, high-performance cars. It started when Lexus developed the LFA, a Ferrari-fighting supercar that came with a price tag of $350,000.

Now, Auto Guide is reporting that one of their well-connected sources has had communication with a senior Toyota Executive who has told them that a new Lexus supercar is currently in the works. Keep in mind that the Lexus mole prefers to remain anonymous, for understandable reasons, but the information at this point is still in the rumor stages.

But when you look at the current culture at Toyota, it may not be such a far fetched idea. The Japanese brand claims there were multiple justifications for the LFA program. The exotic car was a way for Toyota to explore new technologies, particularly carbon-fiber construction. The company is also hoping the $350,000 car raises the image of the Toyota and Lexus brands as a whole.

Despite taking over the reins less than three years ago, Toyota’s CEO Akio Toyoda who is the grandson of founder Kiichiro, seemed to ascend to leadership on the basis of blood rather than his abilities to lead. But Toyoda, has already infused his car company with a new spirit after the multiple recalls and the devastation from the disastrous earthquake and tsunami. And under his guidance, he has taken a hands-on role in developing new edgier models.

Toyoda isn’t your typical grey-suited CEO, as he grew up loving cars and is a certified test driver for Germany's famed Nurburgring, and regularly drives competitive vehicles. Its been reported that he will frequently make highly technical suggestions about ride and handling of the cars his company produces. With Toyoda’s racing background and his love for fast cars, it’s highly likely that a new supercar is already on the drawing boards at Lexus. If the reports from the Auto Guide interview are correct, the new LFA II supercar project will take the company to new heights in the performance car arena.

The AG report suggests the new supercar will be twice the car, with a significantly higher performance level, and could be priced in the $800,000 to one million dollar range. Could it be that Toyoda has a competitor for the Bugatti Veyron in mind? Stay tuned to Torque News as we get more information.

First Videos From Inside The Boring Company's Las Vegas Loop
Cadillac Lyriq, an EV Crossover With a Giant Display, Warms Up With Pre-Production Show
END_OF_DOCUMENT_TOKEN_TO_BE_REPLACED