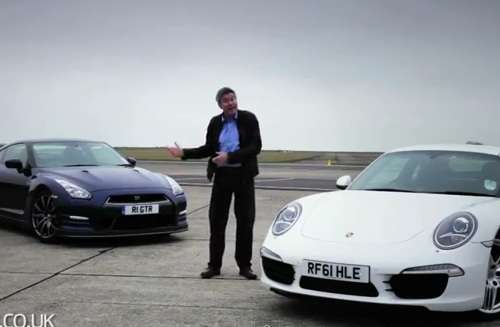 Tiff Needell, puts the 2012 Nissan GT-R and the brand new Porsche 911 Carrera S against each other on the track at the Bedford Autodrome in the UK. Against each other, and against the clock.
Advertisement

Tiff Needell of Evo Magazine in the UK, took a 2012 Nissan GT-R and a Porsche 911 Carrera S out for a fun test run this week to see which car would run faster at the Bedford Autodrome in the UK. Both cars meet at the intersection of high performance and high technology and offer some serious fun in the process.

The 2012 Nissan GT-R expands its performance envelope even farther this year with an increase in horsepower. The new GT-R gets a bump of 45 horsepower to 530 and an increase in torque to 448 lb. ft. The increase is a result of the combination of revised turbo boost and reworked intake and exhaust systems increasing the flow. The huge brakes have also been enlarged to better deal with the added horsepower.

The Porsche 911 Carrera S, on the the other hand, is powered by a 3.8-liter flat-six with direct injection engine, but its power has been raised to 400 horsepower. The horizontally opposed engine design goes back 48 years to the first 911. The new 991 models feature a standard seven-speed manual transmission. A seven-speed dual-clutch automated manual (known as PDK) is available as an option.

In the video below, Tiff takes both cars out on the Bedford track and gives them all he’s got. The Nissan has a horsepower advantage over the Porsche 911 S, but the Carrera is much lighter. Generally, the lighter car would have the advantage on a road track like the Autodrome.

But the Nissan GT-R runs the track in 1:20.1 seconds, over two seconds faster than the Porsche Carrera S at 1:22.8. It doesn’t sound like much, but that’s an eternity in racing time. It is﻿ close, considering the Porsche gives up a bunch of horsepower to the Nissan and wasn't using a dual-clutch transmission like the GTR.

The 2012 Nissan GT-R achieves an impressive level of performance by utilizing all four wheels working in concert to maintain a tenacious grip on the asphalt, where the Porsche uses rear-wheel-drive. The GT-R really shines on the track where its handling limits rank with the top supercars.

Click on the video link below to watch the action.

Image source of 2013 Nissan GT-R vs Porsche 911: Screenshot from the accompanying video.

Kevin wrote on March 30, 2012 - 6:31pm Permalink
Very nice story and video. But the Porsche REALLY should have been equipped with the PDK. Apples and oranges - not a fair fight at all.
Anonymous wrote on April 22, 2012 - 8:00pm Permalink
I could not agree more. The Nissan had a dual clutch transmission and the Porshce did not? What kind of comparison is this? Too silly.