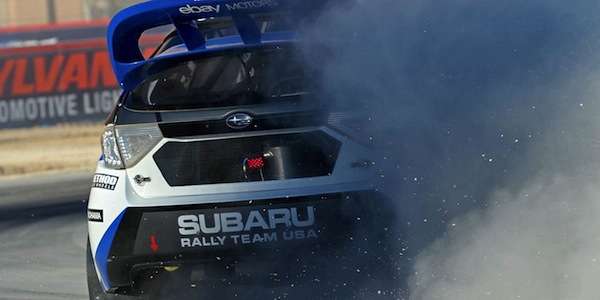 The final 2014 Red Bull Global Rallycross event is underway in Las Vegas and both Subaru WRX STIs are set for the showdown.
Advertisement

It’s the last 2014 Red Bull Global Rallycross event of the season and Subaru has two WRX STIs ready for the final action tonight in Las Vegas, Nevada. Bucky Lasek and Sverre Isachsen ran their Subaru WRX STI’s in the first heat races yesterday and came away with solid results in spite of having some setbacks.

Lasek ended up 3rd and Sverre Isachsen 2nd in their respective heats yesterday. It was a good start for SRT USA and Bucky Lasek said after the days events, “We had great pace today. My Subaru is strong, the track is so much fun and I'm hungry as hell for a win!”.

Sverre Isachsen had a few “minor glitches” but was positive about tonights race. He said, “The track is really, really good. I think there are a few spots with room for passing and it’s a fun track, I like it. But we didn't have a clean run really today at all! We had a sensor go bad that affected shifting and later broke a driveshaft on a heavy landing. But still I was able to qualify 4th fastest and finish 2nd in the heat race. Tomorrow will be better!”

Scott Speed and Tanner Foust both driving VW Beetles for Volkswagen Andretti Rallycross team qualified first and third and winning their heats. The pair of victories brought the team total to 21 heat wins this year. Speed remains eligible for the Supercar title, outqualified the field by over half a second before taking a hard-fought victory in Heat 1A over Rhys Millen and fellow championship competitor Nelson Piquet Jr. of SH Racing Rallycross. Piquet took the joker lane to take the lead, only for Speed to retake the top spot in the following corner and Millen to get by soon after.

It will be a battle tonight

Ken Block entered the event second in series points and earned a victory in Heat 1B, while leader Joni Wiman was unable to defeat Foust in Heat 1C and thus lost a point to Speed and Block in the title chase. Wiman remains in the lead for the championship with 334 points, and Block sits second with 323, Speed climbs to third with 306, and Piquet falls to fourth with 305.

The downtown Las Vegas course is located just off the strip behind The LINQ Hotel and Casino. The final race will be run tonight and this will be the first and only night race this season. Both Subaru WRX STIs are set for the last Red Bull Global Rallycross showdown. You can watch the action on the live streaming Red Bull channel starting at 5pm EST here.