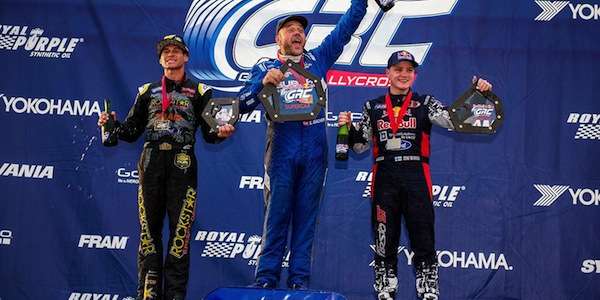 Many thought the first victory for the SRT USA team would come from David Higgins who was driving the DirtFish Subaru WRX STI rallycross car. But it was Sverre Isachsen who pulled out all the stops and gave Subaru Rally Team USA their first victory of the season in the #11 Subaru STI. Isachsen has battled all year in the Subaru WRX STI and pulled out a victory in Seattle.

The heavy rain combined with the mostly dirt heavy track made for a messy day one for round nine of Red Bull GRC hosted at the DirtFish Rally School. But the sun came out on Saturday and the track dried out just enough so it wasn’t quite as slick. The track at DirtFish Rally School is comprised of 65 percent dirt and 35 percent tarmac. But dirt and mud is what GRC is all about.

The first heat saw leader Ken Block on the front and in good shape to keep his lead in the points race. David Higgins started in the third row, but Higgins and Tanner Foust get into a battle and received a penalty for hitting Foust. Higgins never recovers and finished in 6th place and goes to the Last Chance Qualifier (LCQ) round.

Bucky Lasek started Heat B in good shape in the second row with Sverre Isachsen right behind him in row 3. Isachsen runs a clean race and finished in 2nd place advancing to the Final. Lasek falls behind and never recovers and finished in 4th place, but advances to the LCQ.

Lasek is on the front row for the LCQ and is in a good position to win the race. But he stalls the #81 WRX STI on the start and gets his car restarted after it was too late. Higgins starts on the second row and holds on for a 2nd place finish advancing to the Final.

The Final in Seattle

It was a long hard day for SRT USA, but Isachsen prevailed in the final event. Starting from the second row, Sverre Isachsen rocketed to the front with one of his trademark launches. It was a decisive choice to take the joker right off the start that put Isachsen in the lead. Ken Block misjudged the first corner, who also took the joker, damaged his Ford and Isachsen bolted into the lead. His decision to take the joker on lap one put him in the lead which he never surrendered and took the checkered flag for his first GRC win. He was able to hold off Joni Wiman to claim victory in the end. Higgins was never a contender in the final and finished 8th.

Sverre Isachsen, the Viking Warrior gets his first career GRC win and it’s also the first GRC win for Subaru Rally Team USA. It was the ideal place for Subaru’s first win as it comes in the Northwest which is Subaru country. The spectator parking lot was full of Subaru WRX STI performance cars, and the fans went wild as the Subaru WRX STI took the top spot in Seattle. Next up is Las Vegas November 5.

Panasonic Updates Profit Forecast, Noting How Much Tesla Batteries Help The Jump
2022 Porsche 911 GT3 Laps Nurburgring in 7:04 With Journalist Behind The Wheel
END_OF_DOCUMENT_TOKEN_TO_BE_REPLACED