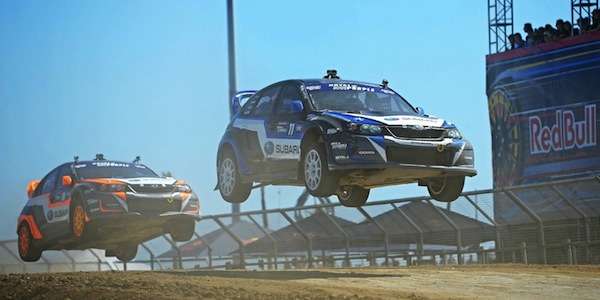 Subaru had three WRX STI Global Rallycross cars competing in LA and came away empty handed. What happened in round 2?
Advertisement

SRT USA showed up in force in LA with three Subaru WRX STI GRC cars for a Red Bull Global Rallycross double-header weekend, but couldn’t score a podium finish. Subaru Rally Team USA was able to get all three WRX STIs into the Final in round two of the challenging race. Sverre Isachsen finished fourth, with Bucky Lasek right behind in fifth and Travis Pastrana eighth.

Bucky Lasek was fast on Sunday, consistently driving 1 to 2 seconds faster per lap and earned a second place finish in his semi-final heat. Lasek started on the second row and rocketed off the line in the #11 2014 Subaru WRX STI to maintain his position throughout the 10 lap race. Isachsen who qualified 2nd was not as successful in the semi-finals and was forced to earn his spot on the final grid via the Last Chance Qualifier (LCQ) where he dominated and finished first.

Isachsen started in the back row in the final after qualifying from the LCQ. With his always impressive launches, Isachsen immediately gained, drove a tight race and ended up just shy of the podium in fourth place. Lasek ran a good race and ended up right behind in fifth. Travis Pastrana in the #199 WRX STI had been leading the Subaru pack for most of the race but inadvertently gave up fourth place on the 9th lap when he slowed prematurely thinking the race had ended.

Isachsen who was able to battle back from the back row to finish fourth said, “I’m happy with fourth but we know we could have finished better, the Subaru WRX STI was really, really good. Our lap times were at the top and the car was very strong on Sunday, the team worked really hard on the setup,” explained Isachsen.

Subaru Rally Team USA mechanics had to work late into the night Saturday to re-prep the team cars for the conclusion of the double-header on Sunday. The team made several setup changes based on the knowledge they learned Saturday and it proved fruitful on the final day of GRC action.

A short turn-around before Seattle GRC

The team won’t have much time to rest as the 2014 Red Bull Global Rallycross series continues with another round in Seattle at the DirtFish Rally School Sept 26-27th. Trucks are en-route and expected to arrive late Monday with a busy reprep scheduled this week. David Higgins will return to GRC and will pilot the #715 DirtFish Rally School Subaru WRX STI. Fans will see Higgins driving the Subaru WRX STI GRC car on a course consisting of 80% gravel which will be a very familiar surface for the Rally America champion. With three cars again in the next GRC race, will Subaru be on the podium? Stay tuned to Torque News for the latest GRC news from Seattle.

Other Subaru WRX STI GRC stories of interest.
Why isn’t David Higgins returning to GRC in the new 2015 WRX STI?