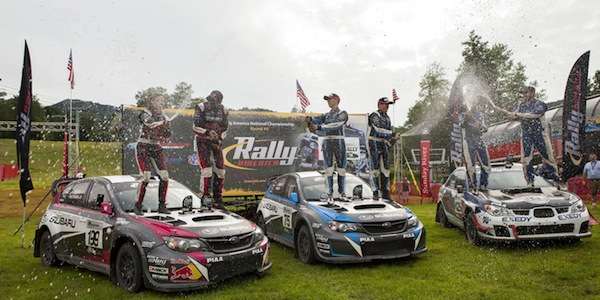 Higgins and teammate Travis Pastrana have been battling for the lead all season long and this race was no different. They both set out to tackle the stages of the two day event in Newry, Maine. Pastrana and co-driver Chrissie Beavis went fastest on the first two stages, beating Higgins and co-driver Craig Drew by 3.2 seconds on stage 1 and just 0.2 seconds on stage 2 to open up a small lead.

Stage 3 saw the duo tackle the legendary Concord Pond stage where Pastrana admitted to pushing too hard and making several mistakes allowing Higgins to win the stage by over 5 seconds and take the overall lead. On stage 4, Pastrana hit a large rock which punctured his tire early in the stage. Pastrana elected to continue on and finish the stage without changing the tire, but lost over 1 minute to Higgins.

After the stage Pastrana said, "We saw the rock coming, it was big. I thought we could straddle it and just go over it but as we got closer it looked scary big, I decided at the last second to try and drive over the rock with the tire, rather than risk damaging the underside of the car, so it got the tire but we saved the car on that one. It certainly would have been faster in the end to go around that rock rather than over it.”

Higgins had a trouble free run and finished the Day 1 minute and 30 seconds ahead of Pastrana, who was comfortably in 2nd Overall. Day two saw Higgins keep his lead through the rest of the stages, and driving the 2014 Subaru WRX STI, wins New England Forest Rally and secures the 2014 Rally America National Championship. Next up is the Ojibwe Forests Rally in Detroit Lakes, MN August 22-23.