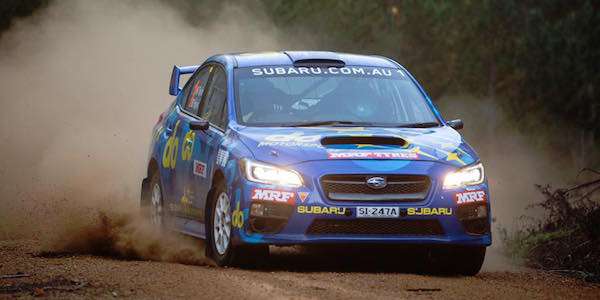 The Subaru WRX STI wins the Make Smoking History Forest Rally. The STI and EVO are still doing battle around the globe.
Advertisement

Molly said, “Les Walkden Rallying prepared the car perfectly for this weekend and both Bill and I felt like we found a new level, so of course we’re delighted by this result. After Day One, Harry Bates’ Toyota Corolla was in second place just 3.1 seconds behind the WRX STI, but on Day Two, a puncture on SS16 demoted him to fourth overall, leaving Taylor with a 22.5 second lead over Quinn’s Mitsubishi Lancer EVO.

The day’s final service saw Taylor and Hayes focused on a consistent final three stages to achieve overall honors. Third places on SS17 and SS18 helped Taylor maintain the lead, which she did over six of the day’s nine stages. A mechanical issue for Bates on SS17 took the Toyota totally out of contention on Heat Two. Another Subaru Impreza WRX STI driven by Mullens and Newell, finished on the podium in third place, 47.8 seconds behind Taylor.

The 2017 Subaru WRX STI is still doing battle around the globe with the Mitsubishi Lancer Evolution. The STI takes the win in the Make Smoking History Forest Rally beating the EVO in Western Australia. Next up for Taylor and Hayes will be Round 3 at the National Capital Rally, Canberra, Australia May 26-28. Molly says, “This gives us renewed confidence going into Round 3, so look out for some incredible action there!”

Antonietta wrote on December 7, 2017 - 10:59am Permalink
Stunning story there. What happened after? Thanks! Manchester City fotbollströja