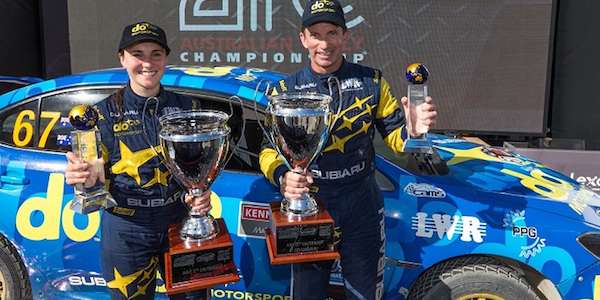 Subaru is no stranger to tight battles for a rally championship, but it was the tightest fight for the title in 25 years of the Australian Rally Championship (ARC). Molly Taylor, the world’s top-ranked female rally driver, is the champion and she becomes the first female winner of the Australian Rally Championship. She and co-driver Bill Hayes battled for three days at Kennards Hire Rally Australia in the All-Wheel Drive Group N production class. They took first place in the Subaru WRX STI. The win put her two points ahead and she takes the driver’s title.

The 2016 Subaru WRX STI NR4 was the rally car that helped Molly join the distinguished list of ARC champions. She now gets some “respek” put on her name. It was a grueling run across 23 stages at the Coffs Harbour, NSW, event, also winning the ARC class in the rally, her first.

It was an amazing ride as Molly took on the leaders in the Les Walkden Rallying-prepared WRX STI. The title chase dramatically came down to the final two stages of Rally Australia, totaling just 12.44 kilometers. Taylor and Hayes get the victory after rally leader Mark Pedder incurred a one minute time penalty after competition concluded.

Molly is the face of Subaru AU Motorsports

Subaru Australia chose Molly to be the face of Subaru Motorsports down under to attract a new-generation of buyers to the brand. It not only draws attention to the WRX STI performance car, but the whole Subaru all-wheel-drive lineup. Subaru Australia Managing Director, Colin Christie, said, “It’s all been underpinned by the great engineering and reliability of the production class WRX STI, we couldn’t ask for a better advert for this incredibly versatile car.”

The win adds to the Subaru Australia trophy cabinet, where 10 consecutive ARC titles from 1996 to 2005, made an unbeaten benchmark before the team withdrew from domestic rallying. Molly Taylor and Bill Hayes re-emerged this year under the Subaru do Motorsport banner driving the Subaru WRX STI.

The team competed in all five rounds of the Kumho Tyre Australian Rally Championship 2016. Molly’s confidence grew as familiarity with the 2016 Subaru WRX STI increased as the season progressed. Molly and Bill bring home another ARC Championship trophy for Subaru. Molly gets some “respek” put on her name.