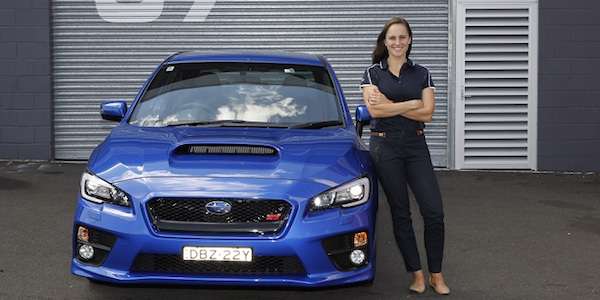 It’s been 10 years since Subaru has been in the Australian Rally Championship. They are returning with a special driver. Who is she?
Advertisement

Subaru hasn’t raced their rally-bred WRX STI down under for 10 years and they are returning this year in a special way. They have a new car, a new team and a new female driver. The car will be the new turbocharged 2016 Subaru WRX STI NR4. The car will be prepared by world-renowned Tasmania-based Les Walkden Rallying. The driver will be Molly Taylor who has some impressive rally credentials.

Who is Molly Taylor?

Molly comes to the new Subaru team (name to be announced later) with impressive credentials. She competed in the Australian Rally Championship (ARC) last year and finished second overall in the championship. Molly is the world’s top-ranked female rally driver and has been driving competitively since 2006. Molly has rallying in her DNA. Her mother is a four-time Australian Rally Champion co-driver, and her dad Mark ran a rally school. Subaru Australia Managing Director, Nick Senior, said, “It’s fantastic to be able to secure Molly as our driver and Subaru Ambassador.”

Last weekend, Molly won one of the most prestigious awards in Australian motorsport. She won the Peter Brock Medal, named after the late touring car legend. It is awarded to the driver who has demonstrated similar characteristics to the late Peter Brock AM, including outstanding ability, a fair and sportsman-like attitude and a willingness and capacity to promote the sport in the wider community. Senior went on to say, “She’s got a wonderful attitude, has worked really hard for the opportunity and she’s a glass half-full person, never the victim.”

We’ve reported on the car, the 2016 Subaru WRX STI NR4 that was just introduced for motorsport fans last year. It’s basically a showroom model with a few modifications made for the rally stages. It comes with the 2.0-liter turbocharged boxer engine that is only available in Australia in this motorsport model. The rally-ready models are for track use only and cannot be road-registered.

Subaru has a storied rally history in Australia

Before withdrawing in 2005, SRTA won eight of the previous 10 manufacturer’s championships, including the last six in a row. The team also scored numerous class victories in both the World and Asia-Pacific Rally Championships. SRTA dominated the Australian Rally Driver’s Championship. The late Possum Bourne won seven championships straight from 1996 to 2002 while Cody Crocker has won the last three (2003-05).

Subaru is attracting new buyers to the brand and Molly will be the new face as they attract younger ones. Molly says, “We’ve got a lot of work to do in testing before the first round in April, but the NR4 is a great car and we look forward to seeing the return of the Subaru rally fans, both new and old.” Subaru returns to the ARC with the 2016 WRX STI NR4. It will make its debut at the Quit Forest Rally, Western Australia, on April 22-24. Stay tuned.