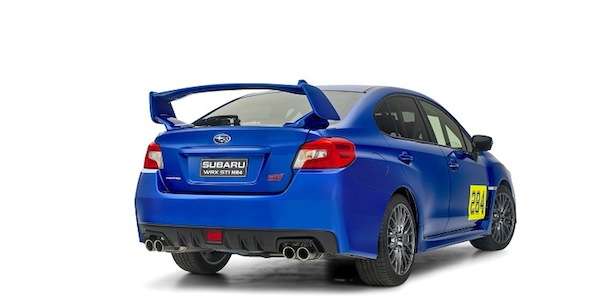 Subaru Australia has unveiled the latest addition to its motorsport armory, the 2016 Subaru WRX STI NR4. Why so many options?
Advertisement

The optional PBMS packages for the 2016 Subaru WRX STI are available for everyone from club amateur to professional rally race teams. Buyers can choose the full blown rally-ready WRX STI NR4 cars that are FIA-homologated and are eligible for FIA WRC2, ERC2 regional and progressive national championships. The NR4 spec cars will meet the FIA’s new NR4 regulations, which replace the previous N4 and R4 classes.

All the STIs come with the 2.0-liter turbocharged boxer engine that is only available in Australia in this motorsport model and the rally-ready models are for track use only and cannot be road-registered. The new Australian WRX STI NR4 Spec will only be available in two colors, white and iconic World Rally Blue.

The WRX STI NR4 Spec models will be priced from $38,000 (Australian dollars), including GST, ex Port Kembla. The STI NR4 will be on display at Subaru Interactive @ Docklands for promotion by Subaru Tecnica International (STI) and then it will be sold. Motorsport enthusiasts in Australia who are interested in getting more information on the 2016 Subaru WRX STI NR4 Spec can contact: [email protected]