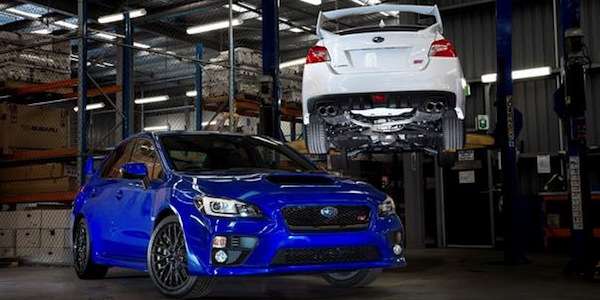 Subaru Australia is importing a limited number of special 2.0-liter motorsport 2016 WRX STIs. Will these STIs be street legal?
Advertisement

It has been reported that Subaru would be returning to the Australian Rally Championship next year, but those reports were not true. Subaru Australia is importing a limited number of special 2016 Subaru WRX STIs with 2.0-liter engines into the country for motorsport enthusiasts who want to go rally racing.

These rally-ready 2016 WRX STIs will be the only ones imported into the country that will come with the 2.0-liter turbocharged boxer engine. The STIs are called WRX STI NR4 Spec, similar to the cars that have been built by British motorsport preparation specialist JRM. These special STIs are imported from Japan specifically for motorsport enthusiasts for rally racing.

Like the STIs from JRM, they will also be FIA-homologated and are eligible for FIA WRC2, ERC2 regional and progressive national championships. The new WRX STI NR4 Spec models will meet the FIA’s new NR4 regulations, which replace the previous N4 and R4 classes.

Subaru responds to return to ARC

In repose to Subaru Australia getting involved with the Australian Rally Championship again, Australian boss Nick Senior told Motoring, "As for motorsport, yep we continually look at rallying and other areas but have not made any decision to or not to." When Motoring asked Subaru Australia National Corporate Affairs Manager David Rowley, he said: “We’ve not got any plans to approach the ARC, but you can’t rule anything in or out for the future.”

These special STIs will not be street legal and are available for motorsport use-only and cannot be road registered. The new Australian WRX STI NR4 Spec will be available in two colors, white and iconic World Rally Blue. Buyers will need to fit an FIA-approved roll cage, which can be ordered at the time of purchase for fitting pre-delivery.

What is the price?

Subaru says the 2016 WRX STI NR4 Spec models will be priced from $38,000 (Australian dollars), including GST, ex Port Kembla. Subaru has not said how many of the limited edition rally-ready models will be made available. Senior told Motoring, "Seven cars have just arrived in Sydney. Two were sold a day after their arrival and three went to NZ where one has been sold to a competitor and we have one at PBMS who are putting a cage in it for us.”

Motorsport enthusiasts who are interested in getting more information on the 2016 Subaru WRX STI NR4 Spec can contact: [email protected]