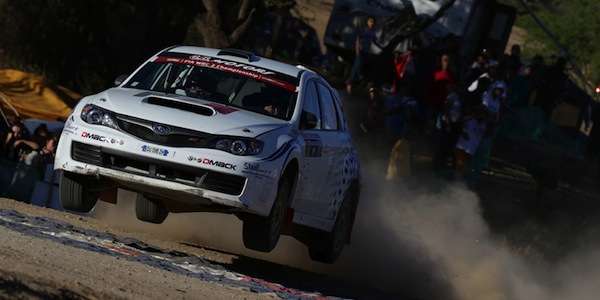 Linari and Arena finish 2nd in the Subaru WRX STI in Production Cup category of WRC Round 3 in Mexico.
Advertisement

Rally Mexico is the toughest environment in the world for the Subaru WRX STI Rally car to race in, but it does two things well. Linari and Arena finish 2nd in the Subaru WRX STI in Production Cup category of WRC Round 3 in Mexico. The special stages took the Rally teams from about 5900 feet to 9186 feet above sea level. It’s one of the most demanding races for both cars and drivers. And if the altitude doesn’t kill you, the temperatures will. The Subaru WRX STI handled both well.

The higher the Subaru WRX STI car gets, the lower the air pressure, oxygen content in the air and cooling efficiency of the engine sink. At temperatures around the 86-degree mark, the objective is to minimize the loss of performance. For the Italian drivers, Linari and Arena, physical and mental strength are the key to success in Rally Mexico.

Fitness is the key to success, particularly on the seven special stages at over 18 miles in length, which were tackled at high altitude and in the scorching heat. Round 3 of the 2014 FIA World Rally Championship (WRC) -Rally Mexico took place in and around the industrial town of Leon in central Mexico. This race is likely the toughest of the season and is the first full-gravel rally of the season.

The stages at high altitudes are unusually hard on the Subaru engines as air is thinner. Together with heat and hazards caused by scattered rocks on the roads, this is always a tough rally both for cars and drivers. The Rally starts with 2 loops of 4 stages including a 27 mile long stage and then 2 runs of a Super Special Stage in Leon. Day 3 featured 5 stages - one of which was a monster 33 mile stage before running a repeat of the same Super Special Stage as on the previous day in Leon.

On the fourth and final day the Subaru team tackled 4 stages including the event's longest at 35 miles. The total competitive distance of all 22 stages is a grueling 242 miles. Two Subaru WRX STI crews appeared in this rally; Gianluca Linari and co-driver Nicola Arena from Italy entered the WRC2 in their Group N Subaru WRX STI, and Peruvian duo Jorge Enrique Martinez and co-driver Eduardo-Luis Aservi competed outside the championship entry.

Linari and Arena in the Subaru WRX STI Rally car recorded a series of top 4 times while others were hit by problems. They also demonstrated speed with a second fastest stage time to finish Day 3 in 3rd in the WRC2. Although they dropped some places on the final day, the Italians demonstrated consistent performance in this hazardous rally to finish 5th in the WRC2 and 2nd in the Production Cup category. Stay tuned to Torque News for the latest Subaru WRX STI Rally news.