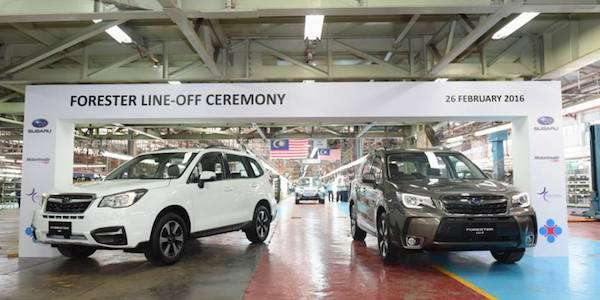 The first 2016 CKD Subaru Forester rolls off the assembly line in Malaysia this week. What is a CKD Forester?
Advertisement

Fuji Heavy Industries (FHI), the manufacturer of Subaru automobiles will be sending 10,000 new 2016 Foresters to Malaysia in pieces. Subaru just started Completely Knocked Down (CKD) production of the Subaru Forester at a Malaysian assembly plant. It’s the second CKD vehicle Subaru makes at the plant, following the Subaru XV crossover that has been produced there since December 2012.

What is CKD production?

CKD is a vehicle which is imported in parts and not as one assembled unit. The Forester will be sent from Japan to Malaysia in pieces and then assembled into the finished SUV. This creates jobs in the target country and makes it easier for Subaru to increase business in the Asian market.

FHI announced on May 9, 2014, their mid-term management vision “Prominence 2020”. Subaru’s parent company laid out plans to build a strong business structure that includes Southeast Asia. The next step is production of the Forester adding to its range of locally-assembled models along with the XV Crosstrek.

Forester is the number one seller for Subaru

The 2016 Subaru Forester is shipped to the U.S. fully-assembled from its Gunma plant in Japan. It’s the brands number one-selling vehicle in their lineup because of strong sales in the U.S. market. Why is Forester so popular? One thing Subaru does well is they stick to their core values that sets them apart from the crowded small SUV field. At a time when many automakers are designing SUVs that look like sport coupes, Subaru bucks the trend and gives buyers what they want.

The locally-assembled CKD 2016 Subaru Forester should also be popular in Malaysia. Forester will go on sale this spring in Malaysia, Thailand and Indonesia through the Subaru dealer network operated by Tan Chong International.