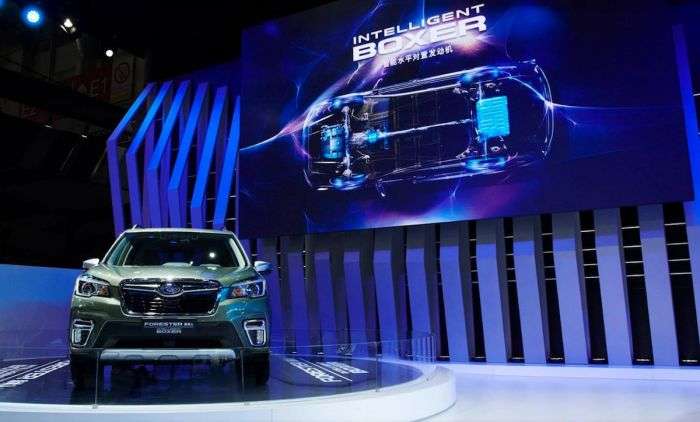 The new-generation 2019 Subaru Forester with “Intelligent Boxer” power is coming with electric technology. Torque News broke the story back in April about a Chinese model, and now Subaru says the new 2019 Forester e-Boxer Hybrid will be available for pre-order in the Japan market.

Subaru released engine specs on the fifth-generation 2019 Forester e-Boxer and the SUV will be powered by the newly developed 2.0-liter direct injection engine coupled with an AC synchronous electric motor. Subaru says it will offer improved performance over the standard 2.5-liter Forester Boxer.

Subaru will use the newly-updated 2.0-liter direct injection horizontally opposed engine plus electric technology producing the "e-Boxer". It will use a lithium-ion battery, and Subaru says it will include SI-DRIVE. With the 2.0-liter gas engine coupled with the electric motor, the Japanese automaker says acceleration of the Forester e-Boxer will exceed that of the 2.5-liter gas model.

Subaru also announced the Forester e-Boxer will come standard with X-MODE for extreme off-road use and EyeSight for improved safety. Subaru announced the new 2019 Subaru Forester hybrid model will be sold in China and now the Japan market. It’s not clear if Subaru will also bring the new 2019 Forester “e-Boxer” hybrid to U.S. shores. Stay tuned.