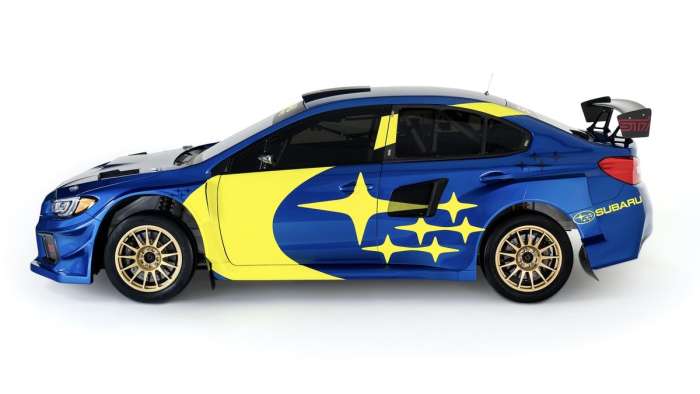 Subaru Returns To Iconic Blue And Gold; Why Should Customers Care?

The iconic Subaru WR Blue livery and Gold wheels return to the brand’s motorsports division. Why should the Subaru customer care?
Advertisement

Some have questioned whether Subaru would move away from performance cars like the WRX STI and just focus on their highly-successful SUVs that are driving the brand’s record sales. But Subaru is making a new commitment to their racing efforts. Subaru of America announced a revision to the structure of its U.S. racing activities, which will now combine stage rally, rallycross, record attempts, off-road racing, and circuit racing under the banner of a new name, “Subaru Motorsports.”

Why should Subaru customers care? Performance, which the brand is known for, is not going away anytime soon. It’s good news for STI performance enthusiasts and customers who buy a new Forester, Crosstrek or Outback.

Subaru returns to their past

The Subaru brand is known for their success on the world rally stages in the 1990s and 2000s and the iconic WRX STI performance car was born out it. Subaru wants this racing success to continue. Subaru returns to the WR Blue livery, Gold wheels and yellow accents on their newest WRX STI stage rally STIs, and Rallycross Supercars that will continue that motorsports success.

The newly-introduced motorsports name falls under the umbrella of Subaru Tecnica International (STI), the brand’s performance division. Subaru says “Subaru Motorsports” brings an expansion “into a wider range of racing disciplines”, all of which showcase Subaru’s core technologies like the flat-four Boxer engine and Symmetrical All-Wheel Drive.

Subaru uses their motorsports division STI to improve their Boxer engines and also their all-wheel-drive system. Customers benefit by getting the latest technology developed in the harsh racing environment. If they can hold up under these extreme conditions, they will last longer on the Subaru Forester SUV, Crosstrek crosser and Outback you drive every day. Performance fans benefit as Subaru uses the technology to develop new engines, transmissions, and suspensions coming on the next-generation sport-tuned WRX, and performance-tuned WRX STI.

Subaru’s biggest motorsports news in the off-season was the addition of Scott Speed to Subaru Rally Team USA who will be behind the wheel of a new 2019 Subaru WRX STI rallycross supercar with the new WR Blue and yellow livery with Gold wheels. Subaru hopes to get their first ARX championship and Speed could be the missing piece to help the brand pull it off.

Subaru will officially debut the all-new livery at the North American International Auto Show in Detroit on Monday, January 14. It will likely be on the new 2019 Subaru WRX STI VT19x Supercar that will compete in the 2019 Americas Rallycross (ARX) series. Stay tuned.